His Opposition To Homosexuality Did Not Go Down Well With Obama. 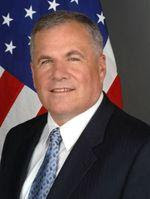 Outgoing US ambassador handed his resignation letter last week citing differences with Washington over his leadership style. Scott Gration had served as US ambassador to Kenya for only one year. Speculation has been rife as to what may have made him resign from a job he termed as his dream job.
It is now emerging that his faith may have come between him and the job. Gration is a son of missionary parents and he is known as a staunch Christian. The Obama administration on the other hand, has been promoting what they term as equal rights for all sexual orientations. As a result of this, there has been wide spread homosexuality in America, something Gration cannot stomach. It started with the repelling of ‘Don’t Ask Don’t Tell’ law, which legalized homosexuality in the US army. Just recently, Obama announced on TV that he fully supports gay marriages.
The US administration is now on a mission to spread the wings of same sex relationships across the globe. Through their embassies worldwide, they are hosting gay pride parties. Last week, Nairobi embassy hosted theirs. Gration authority as ambassador was side stepped and despite his opposition to the same, it was hosted anyway. He did not attend.
Though it is clear this is one of the reasons Scott Gration quit, it is not clear whether he resigned completely out of self will. The US government is known to push people into resignation instead of going through a scandalous sack. It is probable that Gration’s lack of towing the line or soft spoken nature may have made the US government to fire him, or rather order him to resign. Unlike his predecessor Michael Ranneberger, Gration did not take issues head on and was a rare figure on TV. US ambassadors throughout the world are expected to be outspoken and influencers of national issues. Gration was none of the above.
© nairobiwire.com
Jeff Koinange Introduces Sunday Wrap To Finish Julie’s Sunday Live. < Previous
Full List Of Kenyan MPs Without Degrees. Next >
Recommended stories you may like: