Esther Arunga Says She Escaped Seven Bullets Before Hiding At The US Ambassador Residence.

By Ken   /   Friday, 06 Jul 2012 08:56AM   /   Leave a Comment
In an interview with Pulse magazine, Esther Arunga recounts how, together with her husband Quincy Timberlake they have escaped a total of 7 bullets on different occasions. At one point, they had to hide in the US Ambassador’s residence. She says that her family together with senior government officials had conspired to marry her off to a very senior cabinet minister.
Here is the interview.

Pulse: When did you leave Kenya, how and why? 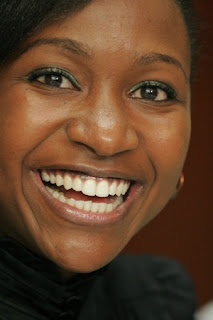 Esther: I left Kenya early this year together with my husband Timberlake and our baby, Sinclair. Things were thick. Just put yourself in my shoes; I was undergoing endless public scrutiny and threats by unknown people. We got threatening notes from people. We had to seek asylum and so we fled away to Dubai then to Melbourne, Australia where we are living now.
P: Some people believe that you are still around and all this is made up?
E: I know that I am misunderstood and that does not come as a surprise. I will get you details of my physical address and all you need to prove this. Whoever wants to prove this can come to Australia and visit. Our doors are open.
P: Who was threatening you then?
E: Some ‘powerful’ guys were tracking us all the time using what we believe were hired men. Everywhere we went a strange car followed us. It may sound bizarre but the same guys gave my husband an ultimatum to leave me and abandon his political ambitions if he wanted to live. One of the common cars that used to chase us was a black Range Rover. We escaped seven bullet shots in numerous attacks before relocating from Kitisuru to another hideout. That was late last year.
P: Did you report all this to the police?
E: We did. We did not know who to trust anymore. When we started working on our visas to leave Kenya, we were told that because of the negative media publicity we had, we needed to get police certificates on our character. We went to the CID headquarters and I got mine.
My husband was denied his. That is the same night bullets came flying through our house windows as raiders threatened. We escaped to the US ambassador’s residence and then got sneaked out of the country.
P: So the US Embassy organised your get-away?
E: The escape was organised by a special friend. She is actually related to a big shot in international politics.
We flew Emirates and as usual, stopped in Dubai. In Dubai, we were issued with a 14-day transit visa under the request of the embassy. We were then flown to the UK then US.
P: What was all that media fuss about you living in Kayole before moving to Dubai where you did odd jobs?
E: I got shocked the media was writing poops all over the place instead of consulting us. I was shocked to read that my husband was a watchman and I was a waitress. One of the powerful men in Kenyan politics was allegedly behind the whole saga basically because we had declared to face him up, politically. Enough said!
P: You once said the Finger of God church, Wilson Malaba, Timberlake and the whole ensuing drama had more than met the eye. What is this hidden truth?
E: I can now tell you that the Wilson Malaba sh** was stage-managed to distract Kenyans from knowing the truth. This may come as a shock but they (powerful politicians) wanted to marry me to a cabinet minister. My family was involved in it as they had and still have interests in politics. The public should know that that is why I was so mad with my parents. If you connect the dots, you will see where the battleground was and why it was all so dramatised.
P: Are you saying that you were being used as an investment?
E: Yes, and don’t take me wrong, I have nothing personal against my family even after I sued them for infringing my rights. It all started in 1999 when I left Kenya for studies in Australia. I had issues with my dad. I got to know Timberlake who stepped in to foot my bills and university fees. That was from 2001 to 2005. Kenyans still believe I met Timberlake just the other day.
P: Is it true that you have sought citizenship in Australia?
E: I am now a citizen here. I am expecting my baby’s citizenship papers soon.
P: How is life now?
E: We are adapting well.  I’m now employed as a barrister (solicitor) at the Supreme Court, New South Wales, Australia. My husband is working as a mining engineer and at the same undertaking online studies and training at Curtin University.
P: Many Kenyans would still read this as fiction. How do you prove all these to any doubting Thomas?
E: Like I said, it is not my work to convince anyone that I am living in Melbourne. The Australia Supreme Court website has all my details. I will also forward you copies of my passport, visa and residence details. We are living in the same house we used to stay in when I was here for studies.
P: Are you bitter since you quit TV into the drama that got the world casting all sorts of negative aspersions on you?
E: Not at all! That is now behind my family and me in general. I am rebuilding my life and will soon return to Kenya to join active politics as I had stated. I intend to run for a top political post and I I’m already doing the networking bit with some political parties and my supporters.
P: Politics, media, law; which way forward?
E: My job here is well paying and I am happy with it. Before I left Kenya, I was negotiating with an international TV channel and the offer was not so bad. I still have a heart for media. However, life is progressive. I am taking a day at a time. I am coming to fight for my political ambitions as announced. Already, there is a song released by unknown people for my campaigns.
© pulse / standard digital
Man Battered By Nyeri Wife Ready To Marry Another Nyeri Wife. < Previous
More Hate Speech Involving Kamande wa Kioi’s Song. cc Mzalendo Kibunjia. Next >
Recommended stories you may like: