15 Robbers Ambush A Nairobi Church And Sweep Everything. (VIDEO)

Robbery In A Nairobi Church Caught On Tape. 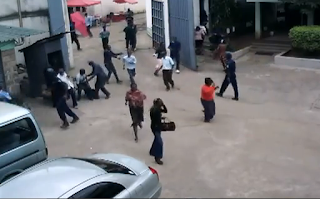 This is one video you will not see everyday. At least 15 robbers stormed a Church near Nairobi’s City Stadium and swept pockets of believers empty. The robbers ambushed Nairobi Lighthouse church to the surprise of Christians, some of whom were just arriving. The action was all caught on CCTV Cameras installed in the church compound.

A crowd of people is seen running towards the church, with a few of them falling to the ground. The men chasing them then embarked on clearing their pockets while giving them slaps and kicks. Several of the robbers went inside the church. At one point, a man arrives in his car only to meet a locked gate. He patiently waits for it to be opened and when he’s inside, at least four robbers are baying for his pockets. They pull him out of his moving vehicle, leaving the car driving itself, almost causing a crash.
After several minutes, one of the robbers standing at the gate gives them the signal to leave, which they do, carrying the paper bags the had stashed the stolen items. From the video, it was clear that the robbers were petty criminals who will steal anything including clothing, but did not have the dignity of not stealing from a church. Here is the video as exclusively aired by KTN.
© nairobiwire.com
Rachel Shebesh Joins #TEAM PREZZO < Previous
Dimitar Berbatov Wants To Leave Manchester United. Next >
Recommended stories you may like: