Some Claim That former president Moi paid him Sh 4 billion, to ditch ODM.

Musalia Mudavadi seems to have struck a jackpot somewhere. The UDF presidential candidate has bought himself a brand new armoured Toyota Land Cruiser valued at sh 36 million. The Sabatia legislator has been spotted in the white automobile several times. It has also been reported that the mp has been assigned officers from the elite squad used to escort VIP’s. It is not clear what criteria is used to determine the individuals to give such state protection, but it is clear that such orders must come from the highest office. 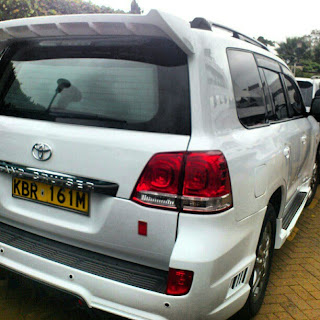 Mudavadi’s new ride is secured from a 7.62mm calibre bullet, landmine and grenade explosions. It can also withstand a blast similar to the one at Assanands House recently. For intruders who may be on foot, electric shock will keep them away.It comes complete with a heavy duty suspension, adjustable shock absorbers and special alloy 18-inch wheels.
The last time a politician’s car aroused much interest was during the last elections when Raila came out with his Hummer. The vehicle was grossly over valued with many people claiming it was in the region of Sh 40 million. It later turned out to be worth less than Sh 10 million. The hype had however been generated. Mudavadi’s car may not generate as much hype but its mere coverage by the media is good enough. The car also comes at a time when rumours have been flying that Mudavadi was paid a good amount of money to ditch Raila. Some claim that former president Moi paid him Sh 4 billion, while some say people close to Kibaki gave him Sh 1 billion. Mudavadi has however denied being bribed to ditch ODM.
© nairobiwire.com
TPF 5 Premieres, As Juliet Karanja (Make Up Girl) Speaks Out. < Previous
XYZ Show Is Back.. Every Sunday on Kiss TV. Next >
Recommended stories you may like: