TPF 5 Premieres, As Juliet Karanja (Make Up Girl) Speaks Out.

Kenya’s Whitney Houston Acknowledges She Overdid Her Makeup, But Is Still Angry At Judge Ian For Kicking Her Out Of  #tpf5. She Promises To Be Famous Before The Show Ends. 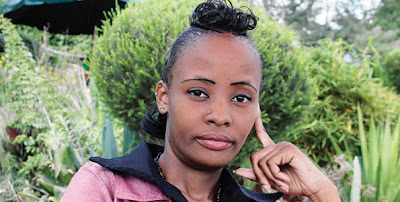 On Sunday night, all TV’s were tuned to Citizen TV as Tusker Project Fame 5, premiered. The opening gala night is probably the most anticipated night of TPF, only second to the Final Night. Nothing has changed in terms of the judging panel or the faculty. There was however a judge Gerald who joined the three judges (Ian, Hermes and Juliana), as a representative of Universal Music Group. Mitch Egwang and Sheila Mwanyingha are still hosting the show.
Surprisingly the stage, backgrounds and lighting are not an improvement from last season. This is one aspect that Tusker has continued to fair badly.
Six contestants were on probation and three of them left the competition. At least five of them sang impressively and the judges must have had a really hard time deciding.
The whole of this week, Kenyans on social media have expressed their support for one Juliet Karanja, a contestant from Naivasha who was eliminated at the last audition. The simple girl, quickly identified for her TV appearance covered in heavy make up especially around her her eyes, earned herself an interview with Sunday Nation. She has promised to be famous before TPF5 ends. Juliet is quick to point out her disappointment with judge Ian, whom she blames for all her woes. She claims she even wrote something on Ian’s Facebook wall, just to see people’s reaction.
“I wrote something on Ian’s Facebook page and saw all these comments of people angry that I was rejected and I was shocked but happy that people saw the injustice,” she says.
The 21 year old, christened Kenya’s Whitney Houston, acknowledges that she overdid her make up, but says that with time she will bring out a better image.
“I did go a bit overboard with the make-up and I had to send someone to bring me the clothes. I still believe I looked good but I can improve on my image because, obviously, I have the voice and talent,” she said.
On her choice of clothing, Juliet has no apologies claiming that she had gone to showcase her talent not her body.
She is currently looking for a sponsor to help her achieve her dream. Her main motivation is to prove the judges wrong.
© nairobiwire.com
Grass Eating Man Causes Traffic Jam In Naivasha. < Previous
Mudavadi’s New Sh 40 Million Grenade Proof Vehicle. Next >
Recommended stories you may like: