XYZ Show Is Back.. Every Sunday on Kiss TV. 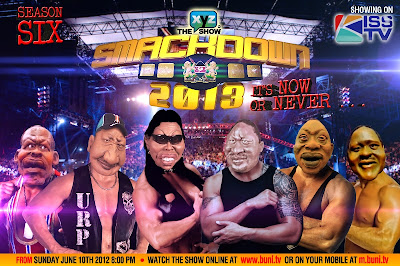 Africa’s number one political satire show, XYZ, is back. Starting this Sunday, 10th June, XYZ season six will be airing on Kiss TV at 8:00 pm. The show which has continued to be rated highly since its first season, greatly improves the ratings of Kiss TV which is a new entrant in the market.
The sixth season has been christened Smack down 2013, in anticipation for next year’s elections. Apart from being aired on Kiss TV, every episode will be available for free on www.buni.tv, immediately after its aired. So for your weekly dose of political comedy, you may want to mark Sunday nights on your diaries.
Kiss TV has been trying to build a loyal audience ever since it started transmission. Though people have not been swift enough to embrace it, they have continued to provide loved content. They have already found a niche in airing football matches. They had rights to air selected English Premier League games and just recently the UEFA Champions League. They are also expected to air selected matches during the EURO 2012. This has proved to be very popular with Kenyans who previously had to rely on pay TV. With XYZ show back on air, Kiss TV can be assured of an improving audience base.
© nairobiwire.com
Mudavadi’s New Sh 40 Million Grenade Proof Vehicle. < Previous
Lionel Messi Set To Become A Father. Next >
Recommended stories you may like: