Will Smith Slaps Gay Reporter For Kissing him. (VIDEO)

Reporter Feels The Wrath Of The Man In black. 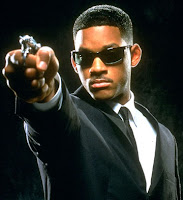 It may have been just another red carpet event for multiple award winning actor Will Smith, except for one Ukrainian reporter who overstepped his mandate. Will Smith was in Moscow for the premiere of his movie Men in Black 3. As he was walking on the red carpet, giving interviews as usual, a male reporter with a mic in hand came and hugged Will smith. Will did not resist it as it looked like any other hug but for the kisses that followed. As the reporter was about to extend his kisses to Will’s mouth, he was pushed away then given a mild slap. After slapping him, he is reported to have said, “He’s lucky I didn’t sucker punch him.”
Will Smith continued with the interviews, maintaining a smiley face as if nothing had happened.
Here is the video.
© nairobiwire.com
A New ‘Octopus’ Predicts Chelsea Win Against Bayern. < Previous
Couple Locks Their Child In Washing Machine.. Then Door Refuses To Open.(VIDEO) Next >
Recommended stories you may like: