Nicholas The Llama Is The New Octopus. 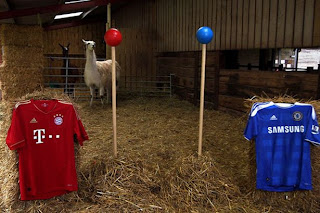 After Paul the octopus, here comes Nicholas the llama. Coming from a history of predicting the FA cup final correctly, where Chelsea won, llama is trying to rival Paul who went to international stardom during the 2010 world cup by maintaining a 100% record in accurate predictions, including his final prediction where he chose Spain as the winners. This prediction was broadcast live on national TV’s across Europe.

The llama is given 2 balls with respective club colours on two different sticks, and whichever it chooses wins. The llama’s owner, Linda Johnson, says that Nicholas does not make decisions in a rush. On the Chelsea game, he took at least 2 minutes to decide.

“Llamas are highly intelligent and very observant – he is much brighter than an octopus and I’m sure he will do better than Paul. Nicholas has always shown a keen interest in football. He often dribbles a football around with his nose even though the seven other llamas who share his stable show no interest in it at all.” said Linda.

Whether Nicholas the llama just likes Chelsea’s colour, or is actually right for the second time, will be known tomorrow, Saturday 19th when the London club battle out Bayern Munich in their home stadium.
Here is the video of the prediction.

Church Elders Blacklist MP For Swearing In The Name Of Uhuru. < Previous
Will Smith Slaps Gay Reporter For Kissing him. (VIDEO) Next >
Recommended stories you may like: