He Was Charged 1 Year After The Incident Happened. 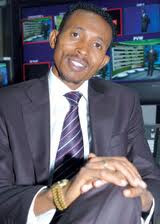 When news broke that KTN investigative journalist Mohammed Ali was in court for theft of a mobile phone, most Kenyans speculated that he was fixed. He was charged with theft of a Nokia 8800, worth sh 100,000, but was later released on a Sh 50,000 cash bail. His various exposes have always hit below the belt, and most times high profile people are involved.
According to the Jackal News, the incident happened almost 1 year ago, 8 months to be exact. Ali was approached by a friend who offered to sell him the phone, which was supposed to have been sent by the friend’s sister from the United Kingdom. The phone still appeared new and so Ali bought it. Months later, police called Ali informing him that they were investigating claims that he was handling stolen property. At this time, the reporter was in Uganda but promised to check into Central Police Station upon his return.
Just this Friday, Ali was informed that on Monday, he would be charged for theft and handling stolen property. The funny part is the charges read that he stole the gadget from Al Mana electronics, along Luthuli avenue, Nairobi.
Mohammed Ali’s investigative works have always hit out at the police for collaborating with criminals especially in the field of drugs. The Jackal News report that just a few days ago, Mike Sonko, ( who is on a collision path with Mathew Iteere) claimed that Mohammed Ali was one of the people on the assassination radar.
© nairobiwire.com
Video Of Prezzo Telling Barbz To Get Impregnated Goes Viral. < Previous
Housemaid Caught On Camera Urinating On Family Food. (VIDEO) Next >
Recommended stories you may like: