Church Elders Blacklist MP For Swearing In The Name Of Uhuru. 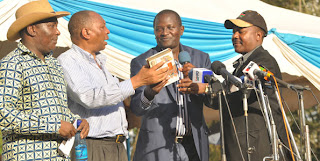 Word out there is that several mp’s who swore (with a Bible in hand) to support Uhuru come what may, are finding the going very tough. The MP’s who were on the front page of a Sunday Nation, the most read newspaper in the country, were Mathioya’s Clement Wambugu, Nairobi Metro minister Jamleck Kamau, Kandara’s Maina Kamau and Maragua mp Elias Mbau.
During a church service Jamleck had attended, church elders took him to task over the swearing ceremony and even denied him a chance to address the congregation, despite his apology.All the mps who swore by Uhuru’s name have been under pressure by friends and family and one of them is thought to have left the country to relieve it.
© nairobiwire.com
Car Split Into Two, In Horrifying Accident (VIDEO) < Previous
A New ‘Octopus’ Predicts Chelsea Win Against Bayern. Next >
Recommended stories you may like: