Mugabe In Singapore To Arrange For Her Daughter’s Education. 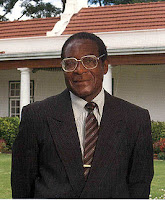 Zimbabwe’s president Robert Mugabe has gone shopping for a school for his daughter, Bona. The first daughter is about to start her post graduate studies and the 88 year old has personally gone to arrange for that. Mugabe has over the past few months visited Singapore several times amid reports that he has prostrate cancer. Last year, Wikileaks released a 2008 US diplomatic cable saying central bank chief Gideon Gono had told US ambassador James McGee, that Mugabe had prostrate cancer and had less than 5 years to live.
© nairobiwire.com
2012 Groove Awards Nomination List. < Previous
Daddy Owen Does Not Want Your Vote For Groove Awards. Next >
Recommended stories you may like: