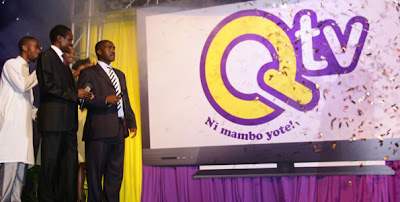 In what may come more as a disappointment, Nation Media Group has replaced e africa TV station with their very own QTV. For the many who were following E Africa’s programmes, they either adjust to the new developments or find a new home.QTV has been introduced as a Swahili station, but going by the programming they have lined up, it hits you that it’s far from it. The lion’s share of its airtime, is said to have been taken up by Nigerian films, which are very popular with broadcasters because the fanatical following they receive justifies the throw away prices at which they acquire the rights to air them. Other programmes lined up include Filipino soaps, some music and  of course more afrosinemas.
On the afrosinema issue, broadcasters should note that airing some movie just because it’s Nigerian, does not always add value. Case example is a 2 day old QTV that airs this African action movie (not sure whether Tanzanian or Nigerian), that resembles a 1960 low budget hollywood movie, without the lighting and the good actors. If this is the stuff they are going to air on day 2, when the ideas are fresh, what in the world are they going to air 6 months from now. I’d be surprised if QTV lasts as long as Classic TV.
NMG, should have just held the idea of QTV a little bit longer, until they came up with an irresistible television station. I can bet the station will not shake Citizen’s afrosinema market. Until you come up with a viable afrosinema alternative, you will continue being a distant second.
© opinion.nairobiwire.com
Shaffie Weru Kicked Out Of Nakuru. < Previous
GEMA & Prayer Rallies Waste Of Time, Eric Wainaina. Next >
Recommended stories you may like: