Shaffie Weru Kicked Out Of Nakuru.

What About My Drink… 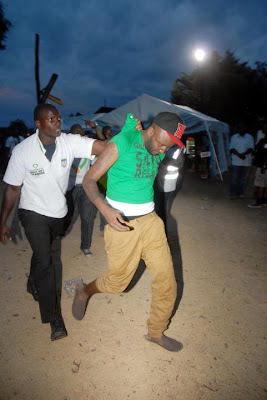 Kiss 100’s Shaffie Weru, is probably known more for his drinking habits than his afternoon show. During the Easter weekend, he decided to treat himself to some NaksVegas ( 10 aside rugby  tourney hosted in Nakuru). As the rumours by some trash gossip sites go, Shaffie started hitting on a chick who was accompanied by his boyfriend, and the boyfriend felt ‘insulted’ and so some confrontation began, and the bouncers came in and dragged him out of the venue.
The truth of the matter is that the real cause of the embarrassment is a mystery. In fact, the only proof that it happened is this photo that was captured by one of the fans. Anyway, the whole incident is a shame to Shaffie and the fact that it was caught on tape only worsens it.
© nairobiwire.com
RJ Berger Reveals He’s Gay. < Previous
QTV, Nation’s Answer To Afrosinema? Next >
Recommended stories you may like: