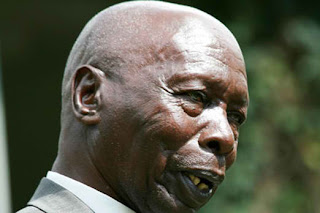 Retired president Daniel arap Moi has denied endorsing Uhuru Kenyatta for president during Njenga Karume’s burial on Saturday.The former president refuted the claims by Sunday Nation that he had endorsed his former project, saying he was quoted out of context. In a statement released by Moi’s press secretary Lee Njiru, he said,

“During the burial I emphasized the need for local MPs and councillors, alongside Uhuru Kenyatta to offer consolation and guidance to the people of Central Kenya .I could not single out one candidate for support when there were many aspirants for the leadership of the country,”
Adele Pictured Shopping For Groceries. < Previous
Nation Media Group To Launch Q TV Next >
Recommended stories you may like: