Cabinet Reshuffle VS Oil Discovery, Which should Get More Airtime? 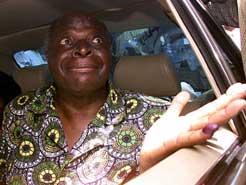 In other news: We have discovered oil.
Local news round up: Oil discovered in Turkana.

Just as Kenyans were celebrating the discovery of oil, Kibaki dropped us another breaking news, the cabinet reshuffle, (bad decision). Why would you cut the moment of a lifetime to give Kenyans not very important news. It would have been more courteous if the president waited for #TurkanaOil to cool down. The most amazing part is not that the president reshuffled his cabinet on the day Kenya discovered oil,  but how the media fell for it. For crying out loud, oil discovery is a lifetime achievement, cabinet reshuffle will mean nothing in a few weeks time, so when the media dedicate half their prime time bulletin to the cabinet reshuffle, and the other half shared between oil discovery,  Peter Kenneth choosing KNC as his party, and God knows what else, then we have a national crisis. Citizen TV went further to bring a political analyst in their studios to ‘break down the latest developments’.

If there is a worse case of mistaken priorities, then our media comes a close second, with Kibaki taking third. Away from that, we have to give kudos to the president for waiting till Wetangula came back from Mali, before demoting him. It would have been very awkward were he to be demoted while trapped in a hotel room in a foreign nation. Of course we know if it was Moi it would be a different story.
Now to Wamalwa. I still don’t picture Eugene as my justice minister. Seriously speaking, I’ve never heard him speak anything newsworthy about the laws of Kenya and I think am not alone. If this is how Kibaki is organizing for his exit, then I think Moi did a better job organizing his.
Am no Mutahi Ngunyi, but I know for sure that Jamleck Kamau and Danson Mwazo bring nothing to Uhuru and Raila’s table respectively, so am thinking that our politicians are running out of ideas, but at the end of everything, we can look back and say, that was an eventful Monday.
© nairobiwire  opinion
Best Of Kenya Discovers Oil Jokes. < Previous
Balotelli Gatecrashes Inter Milan Press Conference. Next >
Recommended stories you may like: