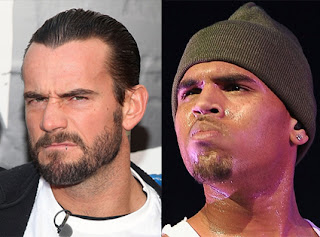 Chris Brown and WWE superstar CM Punk have gone bare everything in the newest celebrity beef. CM Punk pulled the first shot when he went tweeted his dissatisfaction over the way Chris Brown assaulted Rihanna. He tweeted,

“I would like @chrisbrown [to] fight somebody that can defend themselves. Me curb stomping that turd would be a #wrestlemania moment.”

Chris Brown was quick to respond where he tweeted that CM Punk was out to attract more tweeter followers. He also accused him of using steroids and having an inadequate penis. The tweet was later deleted.

CM Punk was not stopping there.  In a video reply he clarified that he does not abuse any drugs and also said.

Punk also challenged CB for a fight, which the latter somehow denied by tweeting.

“Note:today will be the last day I bring @cmpunk existence up!The confrontations that people continuously bring my way are very amusing.