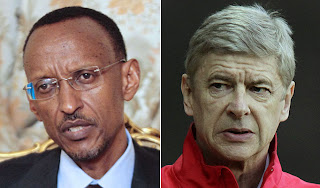 After the aftermath of Arsenal’s 2-1 loss to Manchester United, coming in the same season when Arsenal lost to the same Manchester United 8-2, its coach Arsene Wenger has received an unlikely critic. Rwandan president Paul Kagame has voiced his opinion stating that Arsenal would be much better without Arsene Wenger. He took his disapproval of Wenger to Tweeter, tweeting,

“I very much support Arsenal. But to be honest, Wenger needs to coach another team now and Arsenal needs another coach. When a good team and a good coach fail for long to deliver, one of them has to change, or even both!”

Kagame has been a strong supporter of Arsenal and for his 50th birthday in 2007, the football club gave him an Arsenal banner signed by the entire squad, and a personal letter from Arsene Wenger.

Kenya The Second Most Tweeting African Country. < Previous
Kenyan Girls Choir To Perfom For Manchester United at Old Trafford Next >
Recommended stories you may like: