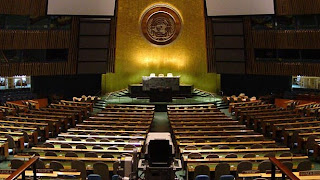 Two bags containing 16 kilograms of cocaine were sent to the United Nation’s headquarters in New york. The bags which had UN logos printed on them were shipped from Mexico to New York through DHL. With no address or return to sender information on them, DHL saw it wise to deliver the bags to UN headquarters.

“It is my understanding that because there was no addressee, the DHL just thought well that’s the UN symbol so we should ship it on to UN headquarters and let them figure out who it was supposed to go to,” DHL’s Deputy commissioner said.

The cocaine valued at over $2million is thought to have been put in UN bags to scare off law enforcement. It is also though that they were not supposed to have left Mexico in the first place.

Kenyan Girls Choir To Perfom For Manchester United at Old Trafford < Previous
Toddler Bites Off Snakes Head. Next >
Recommended stories you may like: