By Ken   /   Friday, 27 Jan 2012 05:06PM   /   Leave a Comment
The life of an unlucky snake came to an abrupt end when its head was chewed by a fearless toddler. 13 months old Imad Aleeyan, has just grown his 6th teeth and is surely putting them into practice.

“I was making his milk and I looked over and saw he had a snake in his mouth,” said his mother. “I started to scream. I couldn’t believe my eyes,” she told AFP. “I nearly died of fright.” 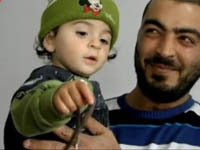 It is her screaming that woke up several neighbors and the rest of the family. A brave neighbor removed the rest of the half dead snake’s body from the kid’s mouth and killed it. They checked the toddler for any bite marks but he had none. According to doctors, the child was very lucky because the very poisonous snake releases less venom during winter. The snake in question grows up to 1.3 metres long, and it was therefore a toddler.

2 Bags Of Cocaine Sent To UN Headquarters < Previous
Video Of Roof Collapsing On Ice Hockey Players Next >
Recommended stories you may like: