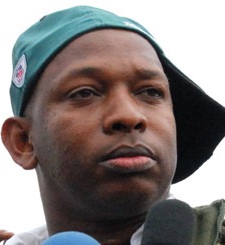 Churchill Live season two is over. The season finale will air on Thursday 30th June. The final show’s guests include vice president Kalonzo Musyoka, Kenya’s big brother evictee Nic Wang’ondu, Manchester united legend Andy Cole and Singer Nonini. The season has been very lively by all measures especially coming to its final days where high profile politicians have been interviewed. Martha Karua, Uhuru Kenyatta, Raila Odinga and William Ruto have all appeared on the show. One character that has been conspicuously absent has been Makadara MP Mike ‘sonko’ Mbuvi. Despite been one with an amazing story to tell, he has failed to appear..

Some weeks back, sonko was scheduled to be on the show but for some reasons only known to him, he canceled the appearance at the last minute. During the live recording of the season finale however, Sonko made a grand appearance backstage and demanded he be interviewed. Naturally, TV does not run like that and his demands were not met. His bodyguards are reported to have manhandled a photographer as the disappointed sonko drunk the night out. It will be remembered that during the campaigns of the Makadara parliamentary seat, Sonko who was by then considered a minor candidate was not invited to accompany Ruben Ndolo and Dick Wathika for a Churchill Live showdown.

Will Tusker All Stars Do Away With The Super Fans? < Previous
Was Kalonzo Cornered Into Paying His Taxes On Churchill Live? Next >
Recommended stories you may like: