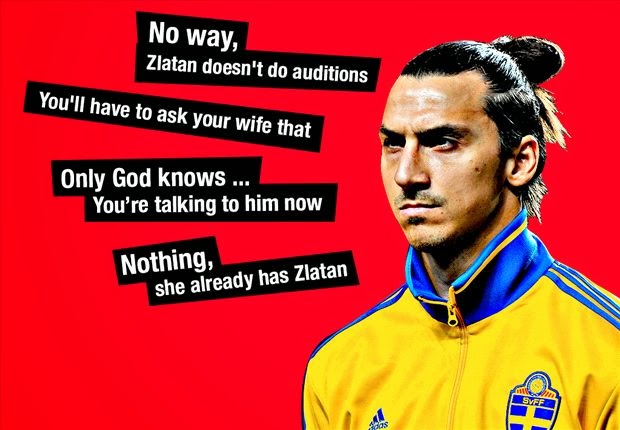 When Zlatan Ibrahimovic retires from professional football, he will leave a legacy of not only on-field brilliance, but also outrageously entertaining quotes. Indeed, no footballer has ever provided the press with as steady a stream of witty sound bites as the Paris Saint-Germain striker, who this week hit the headlines thanks to another eye-catching remark.

In honour of the 32-year-old, we brings you his 10 greatest quotes:

“One thing is for sure, a World Cup without me is nothing to watch so it is not worthwhile to wait for the World Cup.”

After his Sweden side lost out in the play-offs to Portugal this week, Ibrahimovic took to his app, Zlatan Unplugged, to suggest the competition in Brazil will not be worth the hype.

“Only God knows … You’re talking to him now.”

Prior to the two fixtures against the Portuguese, Ibra was quizzed by a Swedish journalist over the outcome of the games. The strikers was non-committal at first, but once the reporter suggested it could be tricky to ask the deity, the PSG man replied with a typically tongue-in-cheek response.

“No way, Zlatan doesn’t do auditions.”

For a long while Ibrahimovic has been infamous for his ego, and this is something that has been evident from the beginning of his career. Offered a trial with Arsenal, he flatly snubbed Arsene Wenger with this classic.

“Nothing, she already has Zlatan.”

When asked what he got his wife for her birthday, the Malmo-born star felt that she already had everything she could ever need.

“An injured Zlatan is a pretty serious thing for any team.”

In his autobiography ‘I Am Zlatan’, Ibrahimovic discusses the problems his team-mates face when he is on the sidelines.

“Come to my house and you’ll see if I’m gay. And bring your sister.”

When quizzed by a female reporter over his sexuality, Zlatan hit back with this no-nonsense reply.

“Swedish style? No. Yugoslavian style? Of course not. It has to be Zlatan-style.”

Asked if his roots had influenced his footballing approach, Ibra suggested that he is very much unique.

“We are looking for an apartment [in Paris]. If we don’t find anything, then I’ll probably just buy the hotel.”

After signing for Paris Saint-Germain in the summer of 2012, the 32-year-old went house hunting but had a simple back-up plan if he failed to find somewhere satisfactory.

Zlatan was once asked who the most beautiful woman in the world was. He may not have had the answer, but he was pretty sure he would get the chance to wine and dine her.

“You’ll have to ask your wife that.”

A reporter learned the hard way why not to ask Ibra about the origin of scratches on his face.

Loading...
REVEALED – A Drone Was Used To Take The Aerial Photos of Machakos Stadium (PHOTOS) < Previous
Construction of High-Speed Railway Line To Begin This Week Next >
Recommended stories you may like: