Is The Star The Only Remaining Independent Newspaper In Kenya 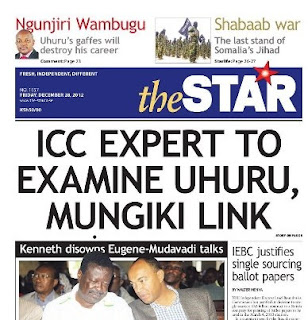 I miss the old Moi days when the press in Kenya was free but restrained and threatened only by the authorities. For those who know what is really going on today and are able to compare and contrast there can only be one reaction when you see today’s “vibrant” press release media at work. You will need a bucket to throw up in.

For younger Kenyans who were still in their nappies (that was before disposable diapers) during the Moi days there is very little that is wrong with the Kenyan media. Or so they think.

What happened to investigative journalists in Kenya save for Mohamed Ali and John Allan Namu? I will give you a straight answer; they were fired and restrained by newspaper publishers keen on not upsetting the board and their powerful friends in corrupt evil government.

Once upon a time the Daily Nation sold close to 300,000 copies of the newspaper on a good day. In those days it was a thin usually 32 page newspaper all in black and white without a single colour photo save for very important days (like when Jomo Kenyatta was buried). I was truly fortunate to have caught the last days of that truly golden era of journalism in Kenya when copy was written by sub editors from notes taken by legendary journalists. Let me explain that. When I joined a daily newspaper as a freelance journalist straight out of school I came across copy (typed from those old Remington manual typewriters) written by a very senior well known journalist. Not only was it full of typos, it was the kind of writing you would expect from a struggling class three pupil. I was in shock until the sub editor explained that that was typical copy and it was the sub-editors in a Kenyan newspaper in those days who actually wrote the newspaper with their red ink subbing biro pens drowning the original typewritten copy all the way.

Still in those days the media in Kenya had not yet prostituted itself. Today many years later the full colour Daily Nation packed with numerous pages hardly sells 150,000 copies on a good day. Blame it on technology and Facebook if you must but the truth is that it has become a very boring newspaper packed with advertisements, company write-ups and carefully re-worded press releases, even from politicians. The truth is that when I am not throwing up I yawn a lot when trying to read a Kenyan newspaper these days. I much prefer Ugandan newspapers.

Chances are that you are a little like me and enjoy reading The Star, the daily newspaper that belongs to the Radio Africa group. This newspaper is probably the only truly free and independent newspaper remaining in Kenya. Little wonder that it does not bore to tears.

Anybody who was familiar with the Russian press and a newspaper called Pravda, during the cold war years will see many similarities in the Kenyan press today.

If you doubt this consider what you have been going through in recent months (if you still like to use that wonderful tool between your ears to analyze news as you read it).
Leading up to the elections it became increasingly impossible to find any unbiased independent analysis of politics in the banana republic. During the actual elections it was worse because there was a complete news blackout under the pretext of avoiding incitement of the electorate). The result is that many weeks after the general elections, most Kenyans still have no idea what really happened. Unless you’ve read Mystery Monday.

And as if that is not enough, currently it is impossible to really find any investigative journalism and analysis. This coming at a time when there is so much happening in the country and it is all very confusing.

It is odd that at a time when we have a much better educated hands in the media (the subs no longer write most of the copy) things should get so terribly boring with self-censorship and corporate interests taking over our newspapers. Why was it that when the media was populated with self-educated folks things were so different?

Take the late Anthony George Mbugguss as the perfect example here. This was a Kenyan pioneer journalist. We are told that intelligence is inborn. Knowledge is what you acquire with it. Education is the method by which you acquire knowledge. But education doesn’t have to be formal. Self-education – especially on the job – can often be pretty effective.

With the scantiest formal education – a mere Standard Eight – George Mbugguss was among the most knowledgeable Kenyans in his profession, rising to become group managing editor of the largest media house in East and Central Africa, the Nation media group. And yet Mbuguss started out serving tea in the news room.

If what I have just said here is not true and our “vibrant” free press is indeed alert and awake why have they not helped us solve the following recent mysteries?

1. When a president who has been under so much pressure that it has taken it’s toll on their health retires what would you expect them to do? Get away from it all naturally. But President Kibaki is still very busy doing something in Nairobi that has prevented him from leaving town? What is this thing that even with modern communication technology makes it difficult for him to leave town? The answer will surprise many. A retired president remains in the public limelight for the rest of their lives more so because taxpayers continue to pay millions of shillings every month for their upkeep. So this is something that you have a right to know and should have been covered in the daily press but it wasn’t. Why???

2. Retired President Moi missed the late Mutula Kilonzo’s memorial church service in Nairobi and the funeral in Mbooni. His official excuse is that he was busy with other matters. A retired president is too busy to attend a funeral and yet a sitting one is not? If you know half the story about the history of Mutula and Moi this is something that does not make sense and will not make sense in 100 years.

3. When a new president settles into office you would expect them to stay put for the first few months as they get their administration running and functioning properly. Yet president Uhuru Kenyatta has been operating like a foreign cabinet secretary. Hours after he landed back in the country from London last week to attend Mutula Kilonzo’s funeral, he was off again to South Africa. Politicians at that level do not do things without a good reason and President Uhuru Kenyatta has a very good reason for behaving the way he is and it is definitely not anything you might be thinking about.

Believe it or not, all these three news items are linked.

For those few who still love to think let me leave you with a typical Kenyan story that is food for thought. A Mama Mboga struggles to educate her children right up to University level. You would think that with children who are much better educated than she ever was, they would figure out a better and more efficient way to sell the sukuma wiki that educated them through the years. But instead those kids sit at home and continue to be fed by the same sukuma wiki as they desperately look for “comfortable” jobs out there. Is this what happened to journalism in Kenya? That better educated journalists don’t have a clue or desperately want to belong with the crooks and thieves who have messed up our banana republic?

Loading...
Nairobi Wire Gets A Simpler New Look < Previous
KTN Refers To Raila Odinga As President For 17 Full Minutes – Photo Next >
Recommended stories you may like: