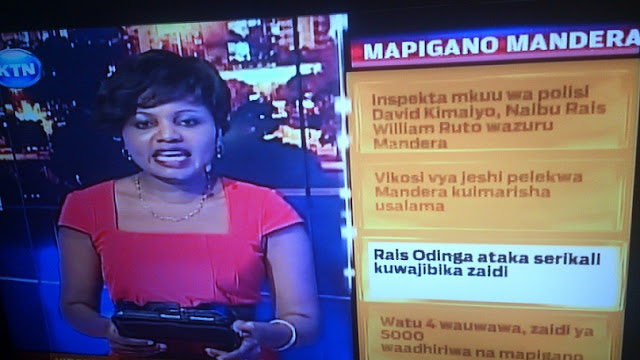 Journalist Albert Gachiri has written a blog post with the title  APOLOGY NOT ACCEPTED! THE ON AIR ERROR AND THE NAIVETY TERROR, where he brings to our attention a recent incident where KTN referred to former Prime Minister Raila Odinga as President.
For more than 15 minutes, the error was not detected, and an apology later could not explain why.
Gachiri writes, “For more than 15 minutes, a national TV station saw no need to correctly state, who is Kenya’s Head of State. From the start of the live newscast, a grossly misleading on screen graphic, was prominently displayed. The apology came much later, and its delivery was even more shocking.”
He continues to say, “In the first instance, did the error completely elude the attention of the entire production and editorial crew involved in preparing this particular broadcast? And if one or more people noticed it, was there no way of raising the alert promptly?”
“And that is why in my books, the apology is not acceptable! (it’s also negating the viewer’s intelligence by saying the error was a typo: ‘Raila’ and ‘Rais’ are at most distant cousins lexicographically).”
This is just one of the many times KTN has been caught on the wrong side. During the presidential elections, the station briefly flashed some figures on the screens, that suggested that Raila was ahead.
Full Article: Albert Gachiri

Is The Star The Only Remaining Independent Newspaper In Kenya < Previous
Crazy Things Billionaires Do.. Next >
Recommended stories you may like: