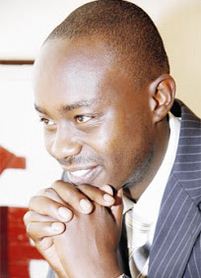 Fidel Odinga, son to former prime minister Raila Odinga, is set to be a father in six months time.
Fidel got married to his Eritrean girlfriend, Lwam one year ago, a few months after divorcing his first wife. The two are said to be very excited of this development.

The couple has been on holiday in South Africa, where they had gone with their father after the Supreme Court ruling. Fidel however remained in SA until one week ago when he returned.

Congratulations to the couple.