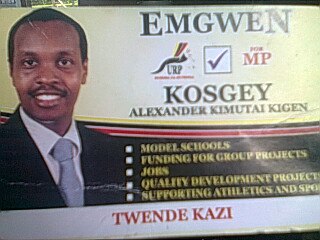 A son to ODM chairman Henry Kosgey, Alex Kimutai Kigen Kosgey, clinched the URP ticket to contest the Emgwen South parliamentary seat. Alex surprised many by choosing a party that is in direct competition with where his father’s choice.
When his father failed to go with the wave and remained in ODM, many expected that Alex would do the same, but for purely political reasons, he chose URP, whose wave is much stronger in the region. He won with 12,017 against his closest opponent who only managed 4,120.

His nomination almost guarantees him a seat in the next parliament, considering Kenya’s voting pattern.
Alex is not only a politician but also an astute businessman. He has invested heavily in the media industry with his most recognized brand being 97.1 One Fm, which has been doing quite well in the recent past. He also owns 91.5 Hits Fm, whose frequency he reportedly bought from Homeboyz.
© nairobiwire.com

Loading...
Manchester United Flies To Sunny Qatar For Training, To Avoid England’s Snow < Previous
Justin Bieber Overtakes Lady Gaga To Be Twitter’s Most Followed Person Next >
Recommended stories you may like: