The former gospel turned secular singer Willy Paul is still trying his luck with Jovial after the songbird turned down his sexual advances.

The controversial singer left a comment on a picture of Jovial, declaring his ‘thirst’ for her.

In another post, Willy Paul went all out saying he would devour Jovial like an accompaniment for traditional ugali if given a chance.

Jovial was however having none of it and told off ‘Bwana Mkunaji’: “Willy Paul mi sio size yako! Tafta size yako!”

But a persistent Willy Paul wrote back telling Jovial to drop the pride. 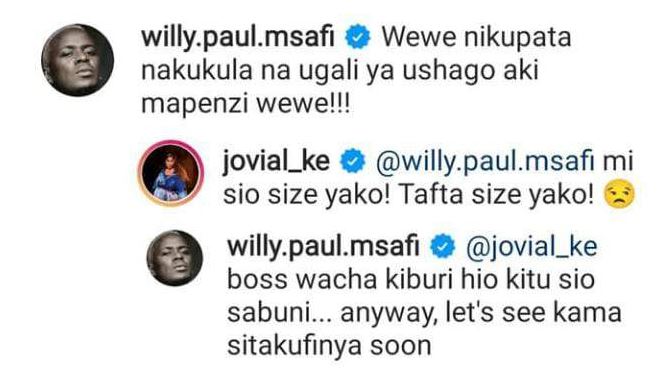 And in yet another comment, Willy Paul changed tack and tried to woo Jovial with some empty promises.

“Maybe I should come slowly jaber… if you know me well then know how much pride I got in me.. so for me to come here and ask you out aaaaaih. Just say yes! Let me show you the other side of life, take you to places you’ve never been before… I know it’s cold out here but I got the skills to warm your heart… Just give me one day, one night and you’ll beg for me,” Willy Paul wrote.

Predictably, Willy Paul and Jovial likely have a new song in the pipeline and are of course trying to create a buzz before they release it.

Uhuru Calls Out Ruto For Lying About Mombasa port, Naivasha Railway Line < Previous
Singer Crystal Asige Nominated to the Senate Next >
Recommended stories you may like: