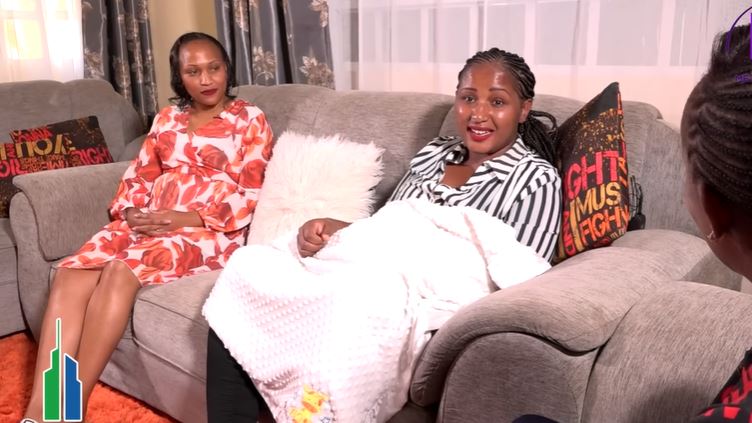 Two women are the talk of Kiambu town after going public about their polygamous marriage as cowives.

Maureen Njeri and Grace Wacera, alias Cerah, not only share their husband Abraham but share a house. They have been living together with their kids in the same house in Juja for one and a half years.

The two women said they decided to live together, without the influence of their husband, to allow their kids to bond and also to nurture their friendship as co-wives.

Cerah, the first wife, has been married to Abraham for eight years. She discovered Abraham was in constant communication with a certain Maureen when she was pregnant with her first child.

Abraham has saved his mistress’s phone number as ‘Maureen Accessories’ and when Cerah asked him about her, he claimed she was a business supplier.

Unconvinced, Cerah managed to go through Abraham’s phone and figured something was going on. She chose not to confront him until when she discovered Maureen had a child.

Cerah discovered Abraham’s second family after her firstborn daughter showed her pictures of Maureen’s child on her phone.

“I learnt about Maureen after my daughter showed me photos of a baby on her phone. I took the phone and I started going through the photos. At the time I was shaking because I also found out they have a baby,” Cerah narrated.

When she confronted Abraham, he finally came clean about the affair and the child. Cerah said she was initially shocked and even though it was difficult and took time, she accepted the reality and decided to stay in the marriage.

After all, Abraham had told Cerah earlier in their marriage that he would marry a second wife.

Cerah and Maureen would meet months later and they started getting along.

“I met Maureen for the first time when I accompanied my husband to her house. When Maureen came to open the gate, she found me on the co-driver’s seat and we said hi and even hugged each other,” Cerah said in a YouTube interview.

They also started spending Sunday outings together with all their kids. Cerah has three children while Maureen has one.

After one such outing, it got late and Maureen and her daughter were forced to spend the night at Cerah’s house.

“Our kids loved each other and we said we could not break their bond. I started carrying my stuff and bringing them to this house whenever I would come visiting,” Maureen said, adding: “Sarah treats my daughter like her own and vice versa.”

Maureen eventually fully moved in and they have been living happily ever after. The co-wives said they respect and love each other and have found a friend and sister in one another.

And because you’re wondering about their sleeping arrangement, Cerah and Maureen said they each have their own bedroom. Abraham decides whom to sleep with every night.