Does the Kenyatta Family Own Rubis? 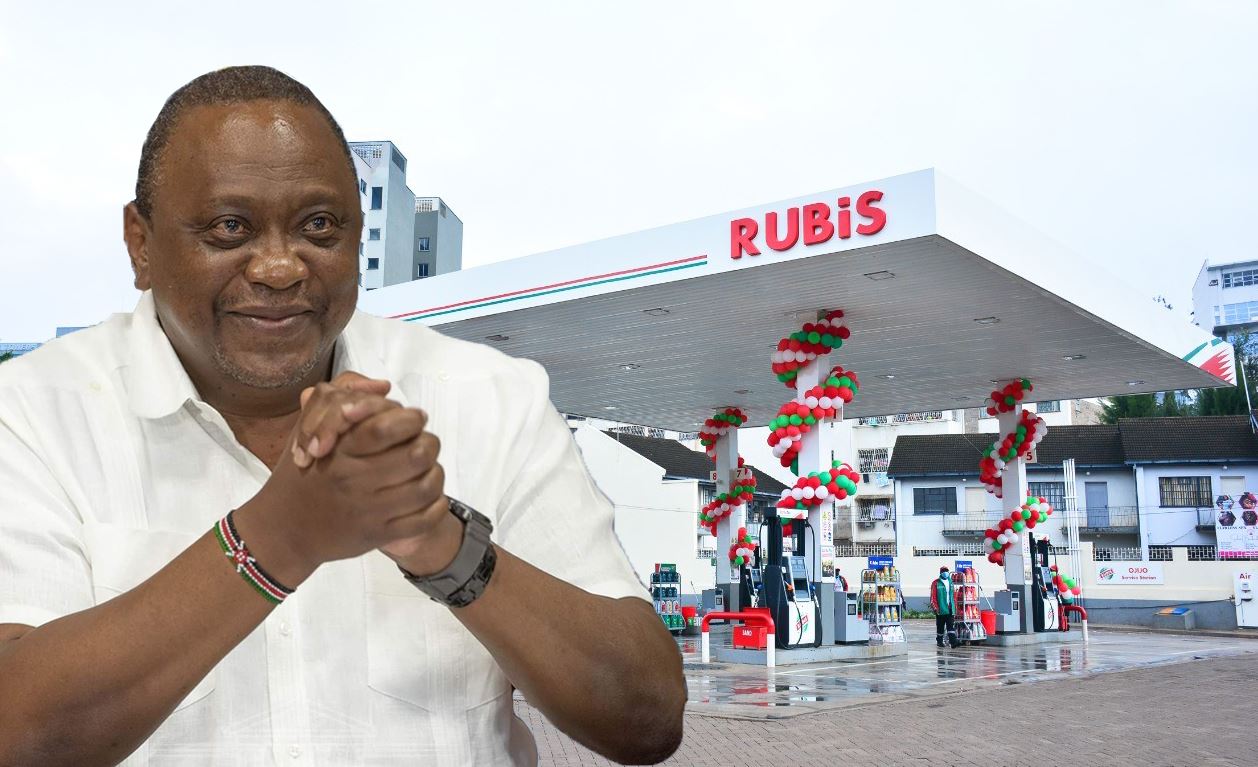 When it comes to big businesses in this country, Kenyans have always been suspicious of the elites. Hardly any major company is mentioned without a reference to its politician owner, whether real or imagined.

This is rooted in our deep culture of corruption especially among politicians and government officials.

For the past ten or so years, Deputy President William Ruto has been the bogeyman, with Kenyans attributing many controversial properties to him. While the DP is a wealthy man with several well known businesses and companies, some of what has been attributed to him in the recent past is simply not his.

He has even on a couple of occasions come out to deny owning some of these businesses. For instance, when Interior CS listed properties owned by Ruto last year, Ruto quipped that while he did own some of the properties, it was surprising that they had not included 680 Hotel and Boulevard Hotel in the list, insinuating that the rumours were all made up by newspapers.

“They have answered all the questions that people have been asking. For a long time, it was the newspapers who were auditing me.

“The people from the Office of the President have improved on what the newspapers have been saying. They have removed some of the things people claimed I owned like 680 and Boulevard Hotel,” he said.

The DP has in the past also been falsely linked to the now-demolished Taj Mall.

The Kenyatta family is another target when it comes to similar rumours. There is no denying that the family is incredibly wealthy, and the circumstances in which they acquired their wealth have always been a matter of speculation for decades.

As Uhuru’s presidency approaches its end, we are hearing more and more talk of companies supposedly owned by the first family.

Other than the well-known Kenyatta-owned companies like Brookside and NCBA, Kenyans have started adding more and more companies to the Kenyatta catalogue.

The latest that has us intrigued is Rubis.

As the fuel crisis spread across the country in late March and early April, the notion that the fast-growing Rubis is owned by the Kenyatta family has spread like bushfire. Let’s examine the details.

Is Rubis owned by the Kenyatta family?

It is worth noting that for the uninitiated, Rubis appears to be a new company that has quickly become one of the largest if not the largest oil marketer/petrol station chain in the country.

After all, it has only been in the country for a little under three years. Those who don’t read the pink business newspapers may however have missed the story, and thus attribute this rapid rise to the top of Kenya’s retail petroleum industry to some kind of ‘dynasty’ money.

The truth however is that Rubis is a 30+ year old French company, founded all the way back in 1990.

In 2019, the company entered the Kenyan market by acquiring 100% of KenolKobil for $353 million (about Ksh36 billion then). According to the Competition Authority of Kenya, this was paid in cash, not stock, meaning the Kenyan owners of KenolKobil got no shares in Rubis Energy. 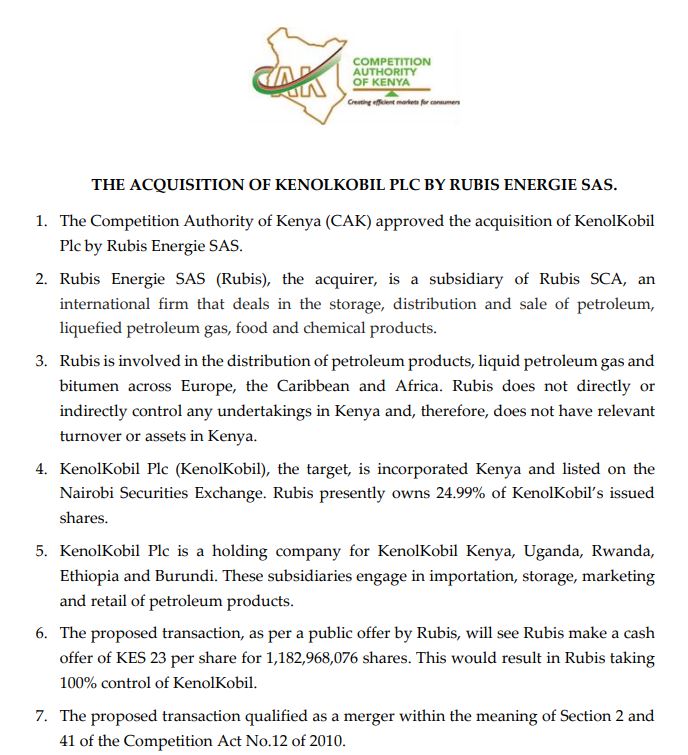 Rubis was however not done shopping. In late 2019, they completed the acquisition of Gulf Energy for €129 million (Sh16.4 billion).

In the process, Rubis became the largest petroleum company in Kenya by market share, leapfrogging both Total and Vivo Energy (Shell).

Further, the company committed Sh2.4 billion to rebrand all these stations to ‘Rubis’ by end of 2022. For most Kenyans, this has been the most visible part of the transaction.

Since we have established the premise in which Rubis has taken over Kenyan highways in a such a short period of time, who really owns the company. Good thing it is a publicly traded company in France, with a public list of its shareholders.

The major shareholders are all French entities. However, the vast majority of shares (85.74%) are free float, traded on France’s stock market – EURONEXT PARIS

Is there a chance that it has local shareholders?

Rubis own financial statements state that they own and control 100% of the Kenyan operation. So, unless some Kenyans have bought Rubis shares on the Paris Stock Exchange, we don’t believe that’s the case. 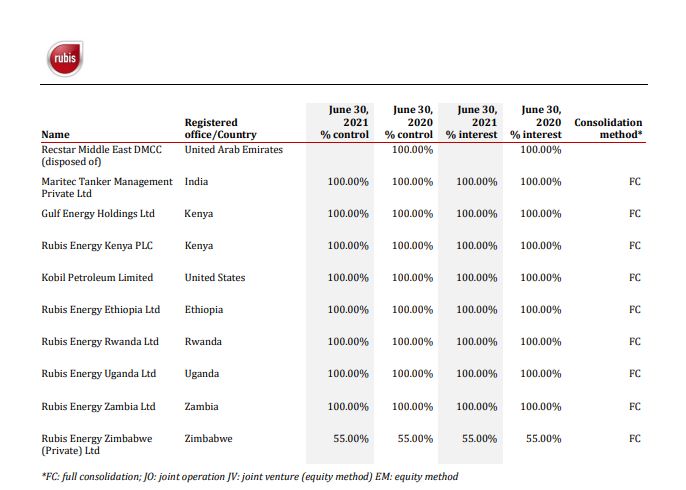 Does the Kenyatta family own a Rubis franchise?

While I believe the question of Rubis ownership is settled, there is the issue of the local franchises.

Most petroleum companies opt out of the day to day running of their retail outlets, issuing out the rights to interested individuals. They then provide all the branding, become the sole supplier of  all petroleum products and set the prices.

Vivo Energy (Shell) and Total both have open application processes for this. However, we could not find any evidence that KenolKobil or Gulf Energy employed a similar business method.

In fact, KenolKobil managing director David Ohana was in 2016 quoted as saying, “Non-fuel income is a big thing for us and we see it contributing about 15 per cent of revenues in the next financial year. This is because the rent we collect is quite big in our books.” He was referring to the restaurants and other businesses that rent out space at their stations, perhaps insinuating that they did own the stations.

In any case, if KenolKobil or Gulf had a franchise program, theoretically, the franchise holders would still be the ones operating the stations under the Rubis brand.

Since entering the Kenyan market, Rubis has continued to open more outlets. However, the ones they acquired still form the bulk of their business.

This means that even if there was a chance that the new branches have a local ownership, it wouldn’t be sizeable enough to make conspiracy fodder.

Bonfire Misadventure: Sarah Kabu Cries Simon Kabu Has Left With Kids As PHOTOS of Alleged Mistress Emerge < Previous
Nothing Less Than a Rebuild Will Do for Manchester United Next >
Recommended stories you may like: