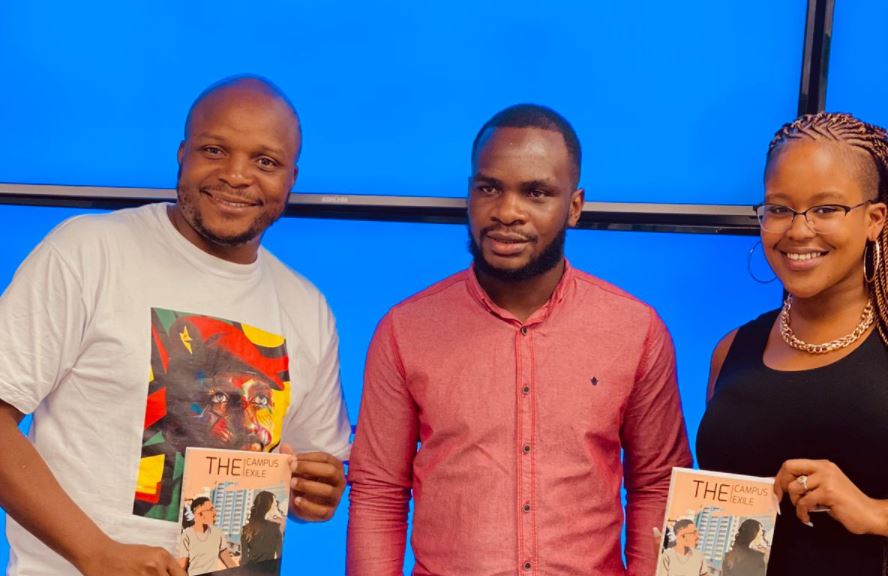 Kiss 100 FM presenters Jalang’o and Kamene Goro have made amends weeks after they were accused of plagiarising content from an author.

The Kenyan author Collins Sakwah Ongoma had shared his displeasure with the radio personalities on Twitter, saying they used his thread stories for their radio discussions without crediting him.

“This is the second time Jalang’o and Kamene are using my thread stories for their radio Content. It is sad that even after Jalang’o read my thread story and coined his content from it, he still referred to me as ‘A thread from this guy.’ No acknowledgment, no nothing,” Sakwah lamented.

The Premium Tears author noted any material developed by content creators is equivalent to intellectual property and should be treated as such.

“I’m not asking for any payment, just credit me as you use my threads. I’m a content creator and that’s rightfully my work. It wouldn’t hurt to say my name, as you use my work on radio,” said Sakwah.

This is the second time Jalang’o and Kamene are using my thread stories for their radio Content. It is sad that even after Jalang’o read my thread story and coined his content from it, he still referred to me as ‘A thread from this guy.’
No acknowledgment, no nothing. https://t.co/bPwBwHX2Kl

Of course, Kenyans on Twitter rallied behind the author to demand better from Kiss 100 FM, and the Radio Africa Group-owned stationed has obliged.

On Tuesday, Jalang’o and Kamene came face to face with their accuser; Sakwah Ongoma was a guest on their radio show.

Sakwah, who is famed for telling engaging short stories, penned yet another delightful read narrating his visit to Kiss Fm.

He mentioned that when he called out Jalango and Kamene all he wanted was an apology but he ended up getting more than that.

In addition to an apology, the radio presenters also bought his books. Jalas even did one better by hosting Sakwah on his popular YouTube show, ‘Bonga na Jalas’.

The facade of most celebrities painted in media can be misleading. Some celebrities are not whom we are made to know, and sometimes you need to meet artists in person to differentiate them from their art. That is what I picked from my brief visit to Kiss FM.

When I came out with my guns, calling Jalang’o and Kamene to come out, I just wanted to talk and get a verbal apology from them. That is what I wanted, that is what I expected, but I got more than that. The invitation was way bigger than what I was asking for.

I received an invitation to sit next to one of the Kenyan entertainers that I revere most. I received an apology from Jalang’o, Kamene, and Kiss 100, both on-air and behind the scenes. They bought my books and told their colleagues about who I am and what I do.

I can’t lie, seeing some faces that I have only seen on social, mainstream, and print media made the little baby inside me to bubble with joy. I met Willis Raburu, or at least I saw him, and I remember thinking to myself; this guy isn’t as wild as he portrays himself on TV.

He was calm and collected. I remember eavesdropping on his conversation with Jalas, as we waited for the lift, and the two were encouraging each other to continue working hard and reminding each other that it was time for young people to take what is theirs.

That two people; rich, successful, and celebrated, possessed more hunger and desire for more success was motivating to me. In 2017, a few years after I had dropped out of campus, I used to work as a farm boy, mundu wa ikatala.

My colleagues, also dropouts, albeit lower primary school dropouts, and I used to make Ksh. 200-300 per day. In the evening, we would bounce to Buyofu Market, order cups of porridge and a package of kangumus each, then eat away our earnings.

And wait for tomorrow’s 200. We had zero ambitions, zero desires to grow, a reason why I remained poor and destitute. Successful people are never satisfied with what is at hand. They always want more. That is what I picked by observing Jalang’o.

That is what he told me when he took me to shoot a Bonga na Jalas video outside the studio. A brief moment in the company of Jalang’o was inspiring. I sat back and observed how he contacted himself, how he got from one task to the other, how he interacted with his colleagues, and people whom we met outside his workplace’s gate. He was warm to everyone, as he was to me and the fans that he met outside the gate. Kamene was exactly how I expected her to be; bright, bubbly, and talkative. She was the first to talk to me when I walked into their studio.

We talked briefly off-air, where she offered her regrets, apologies and explained the circumstances that led to them using my work on air. She cheered me on, psyched me on when I seemed dull, starstruck, and maybe scared to go on air. And isn’t she beautiful?

After the show, she bought my books, and we had a chat about the writing journey. She disclosed her plans to publish a book of her own, which she is working on.

In the wake of Kenyans sharing their horrifying experiences in the hands of media personalities, my experience with Kiss 100 employees was warm, kind and accomodative. A bountiful thank you to my readers who stood with me and made noise until my quest was realized.

A short thread.
The facade of most celebrities painted in media can be misleading. Some celebrities are not whom we are made to know, and sometimes you need to meet artists in person to differentiate them from their art. That is what I picked from my brief visit to Kiss FM. pic.twitter.com/QnO1UXDj7Q

And here is the Bonga na Jalas @JalangoMwenyewe interview for Jalang’o TV.https://t.co/4okd4CHu45

How I Will Turn Machakos into a City in 5 Years – Nzioka Waita < Previous
This is What’s Trending in Nairobi Today Next >
Recommended stories you may like: