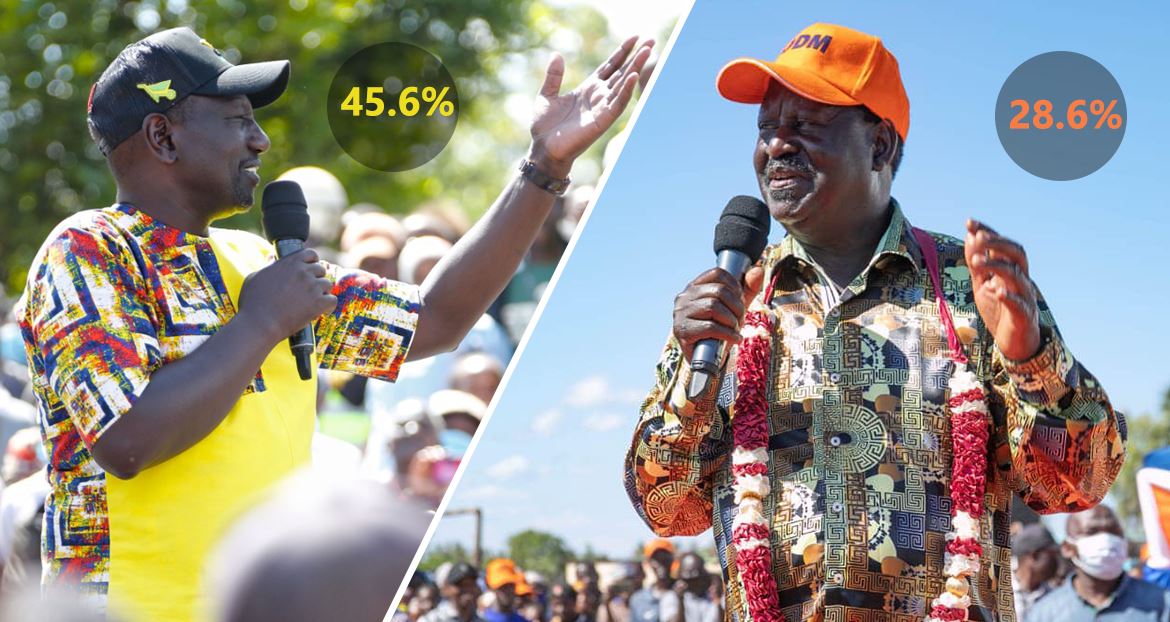 2022 is setting itself up to be a long campaign year. It has been quite obvious for a long time that Deputy President William Ruto has had the head start, seemingly starting his campaigns immediately after the 2017 elections.

A new poll by Radio Africa is painting the current picture, showing the gains or losses the main candidates have made, as we enter the election year.

As with all other polls before it, Deputy President William Ruto is still the most popular candidate, followed by ODM leader Raila Odinga. The two are setting themselves up for a two-horse race, and are both formidable even without the backing of the smaller players like Kalonzo Musyoka and Musalia Mudavadi.

If elections were held today, 45.6% would vote for William Ruto as president. Raila Odinga would get 28.6%.

While Ruto is a lot closer, neither of the two horses meets the constitutional requirement of 50%+1 votes. However, that may quickly be remedied by the huge percentage of undecided voters, which stands at 14%. 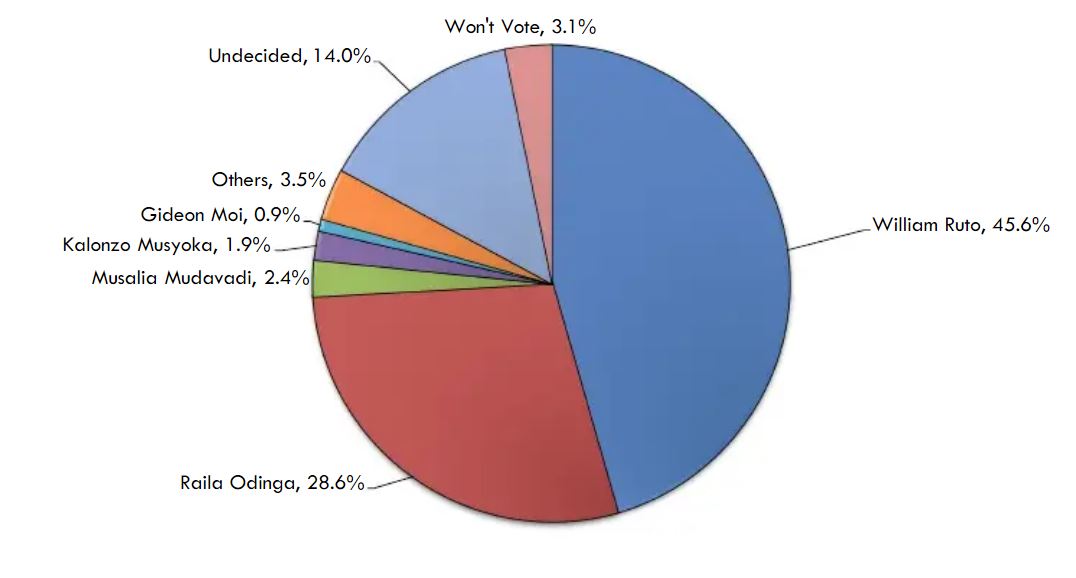 While the numbers are not great for Raila Odinga, he may actually be pleased with them. The former Prime Minister is rising fast, and the picture may be very different in a few months.

In the last poll by Radio Africa, Raila stood at just 14.1%, meaning he has doubled his support. However in the same time, Ruto has also gained 3%, which means that Raila is not the sole beneficiary when undecided voters ultimately decide. His only option as the election approaches, is to convert a mathematically significant number of Ruto supporters into his supporters.

That is a lot harder than convincing people who are on the fence.

The outlook from the regions is also not good for the former PM. There was hope in his camp that he can re-build the support he received in 2007, when he swept virtually every province with the exception of Central.

However, that will be a fete very unlikely to be replicated, going by this poll.

Deputy President William Ruto leads in every region with the exception of Nyanza.

In Lower Eastern, a region Raila carried by a significant margin, Ruto (31.6%) is ahead of both him (23.9%) and Kalonzo (17.9%). This shows that the ODM leader totally needs Kalonzo on his side, or at least cannot afford Kalonzo switching to Ruto’s camp.

Coast is another region that has traditionally supported Raila, but where he is fairing badly. He has 34.1% support, against Ruto’s 42.9%.

However, it’s not all good news for Ruto. One region he must win big is Central, and he is not fairing as well as he would like. At only 58.7% support, Ruto must work really hard and convince more local leaders if he wants Raila (18.1%) to stop chipping away his support.

It appears as though Ruto’s hands are tied in terms of selecting a running mate, as he may not survive the optics of picking a kikuyu as his DP. However, Raila does not come with similar baggage, which may spell more bad news in the mountain for the DP.

Should Raila select say, Peter Kenneth or Martha Karua as his running mate, Ruto would have a very hard time in Central, which means he must spread out his attention and resources everywhere else in a bid to recoup those votes.

Other than who Kenyans will vote for if elections were held today, the poll also asked them who they think will win, regardless of whom they will vote for.

Ruto wins with 50.5%, with Raila at 30.9%. This may be good news for the DP, since most undecided eventually tend to align themselves with the candidate they think will carry the day.

There was even more good news for Ruto, since 44.6% of Kenyans think he would make a good president, while only 28.1% think the same of Raila.

His party UDA is also the most popular at 32%, with ODM coming in second at 22%.

Even further good news for the DP is that a vast majority of Kenyans have responded to the ‘dynasty’ vs ‘hustler’ messaging. 72% feel that Kenya should move away from the dynasties, a category in which Raila falls.

Only 18% support the old dynasties (Kenyatta, Moi, Odinga). Ruto would be stupid not to capitalize on such strong sentiments.

Check Out The Incredible Progress of the 84 km Kenol to Marua Dual Carriage (Drone Video) < Previous
Top 5 Digital Marketing Tools for Businesses in 2021 Next >
Recommended stories you may like: