Is Peter Kenneth Being Primed To Be Raila’s Running Mate? 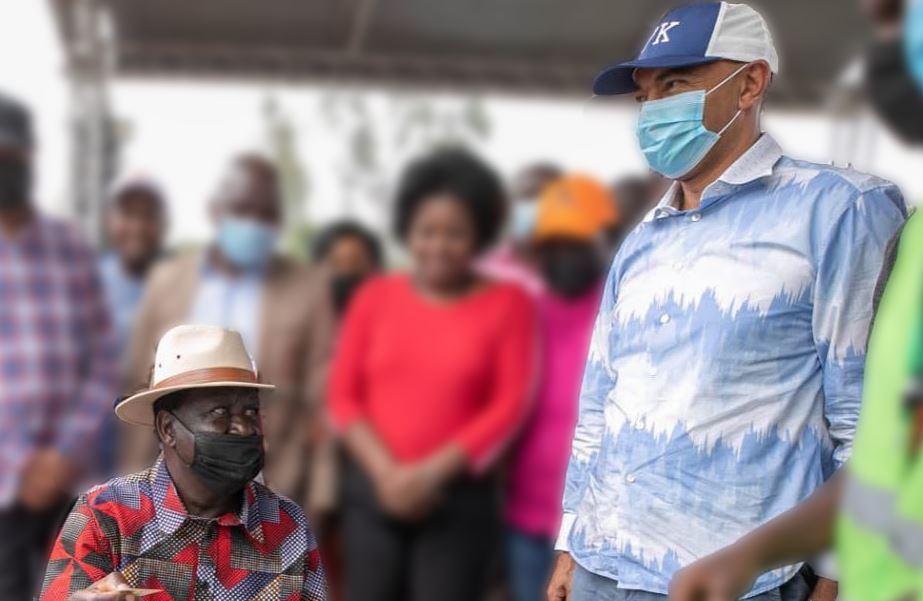 The presence of Peter Kenneth in almost all public rallies by Raila Odinga has started to raise eyebrows.

He has not announced interest in any position, but has only declared support for the former PM. It is clear at this point that he will not be throwing his hat into the Presidential ring again in 2022, which only raises questions as to what he is up to.

There have been speculation that PK could be interested in the Nairobi gubernatorial seat, but he has done very little campaigning in that regard.

As Raila tries his luck with the presidency for the 5th time, it is clear that he has identified the Mt. Kenya vote as crucial. Several leaders from the region, among them Health Cabinet Secretary Mutahi Kagwe, Agriculture CS Peter Munya and several governors among them Nakuru’s Lee Kinyanjui, have been mentioned as likely running mates.

Raila’s arrangement with Kalonzo Musyoka over the past two elections has not yielded much, which means it would be reasonable to assume he will go a different route in 2022. It also appears that the ODM leader is not putting much effort into courting Kalonzo this time round, a situation that has opened up talk of Ruto trying his luck with the Kamba kingpin.

On Sunday, PK accompanied Raila to Legio Maria Church in Makongeni. He also joined him in addressing several gatherings at different stop-overs.

Peter Kenneth has also been part of Raila’s entourage in Nakuru, Meru, Laikipia, Embu, and Tharaka Nithi. Even before this wave of rallies began, Kenneth met regularly with Raila and his allies at Francis Atwoli’s home, and even at Raila’s Karen and Bondon homes.

PK finds himself in an enviable position, enjoying support from top confidants of President Uhuru Kenyatta, like David Murathe, and perhaps even from the president himself. Murathe and Maina Kamanda have in the past insisted that Murang’a must produce a running mate, because it has never produced a president or deputy, despite its role in Kenya’s history.

That could be translated to mean that they have settled on Peter Kenneth.

Speaking on Peter Kenneth’s credentials, nominated senator Isaac Ngugi said, “Peter Kenneth is approachable, he has no issues of corruption and his track record as the MP for Gatanga speaks for itself. Again his 2013 bid puts him ahead because he has experience of conducting a presidential campaign. He has also not projected himself as a tribal leader and he is accepted in Mt Kenya region and beyond.”

However, Gatundu South MP Moses Kuria is of a different opinion. He thinks that any leading presidential candidate interested in the Mt. Kenya vote should pick Narc-Kenya leader Martha Karua for the running mate slot.

“Whoever is interested in the Mt Kenya vote should pick Martha Karua.  She is the senior-most politician from the region having served as a Cabinet minister. Her integrity is not in question. We want someone who is capable of check mating a President and consolidate the gains that have been made and protect the region’s interests,” he stated.

With Karua having made it clear she has no intention of supporting Ruto, that only leaves Raila.

While the idea of having Peter Kenneth as his running mate seems like a no-brainer for Raila Odinga, it still presents a tricky situation, where a Kikuyu candidate is on the top ticket once again.

However, it still a more likely scenario than Ruto picking a Kikuyu for DP.

If the quest for Mt. Kenya votes will come down to running mate choice, it appears the odds favor Raila Odinga.

Uhuru Park Dais Demolished in Ongoing Renovation < Previous
Sh170 Billion: The Amount Kenyans Will Spend on Football Betting in 2021 Next >
Recommended stories you may like: