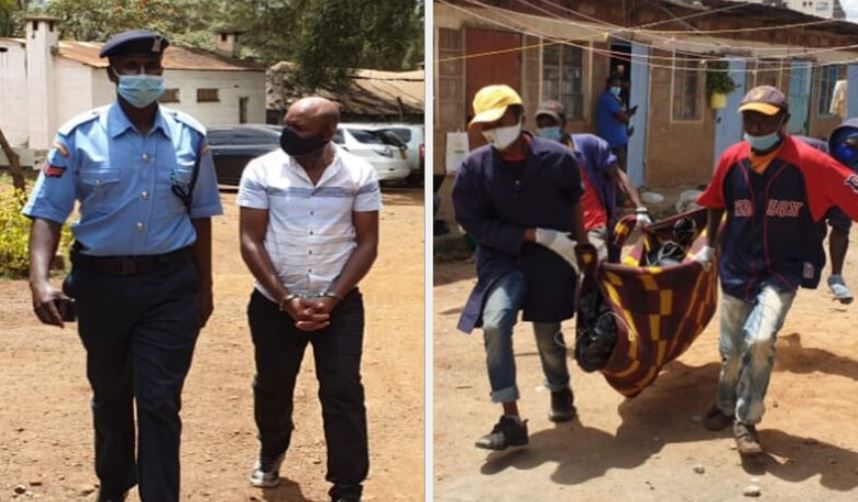 Kiambu County police officers have arrested a man in connection with the death of his girlfriend.

According to neighbours, the woman was last seen in public on Sunday during the day while she was hanging clothes on a communal clothesline.

On Tuesday, the neighbours noticed a foul smell from Munyao’s one-roomed house and alerted police.

Officers rushed to the scene, broke down the door, and found the body of the deceased wrapped in a nylon bag and placed on the bed. Her pair of trousers had slightly been lowered.

Neighbours told The Standard that the woman visited Munyao a few times a month.

“We did not know the lady had been killed. Munyao would routinely leave the house in the morning and return in the evening,” said John Ngara, neighbour.

“We even saw him leaving for work this morning (Tuesday, April 20). We’re shocked to learn that he was staying with a dead woman’s body in his house,” added Ngara.

Mary Kibathi, another neighbour, said: “Besides a foul smell, we had noticed a swarm of flies clustering in the suspect’s house through the ventilation, suggesting all was not well.”

Directorate of Criminal Investigations (DCI) detectives said the body had decomposed, indicating she was probably killed on Sunday.

The detectives also noted there were marks on the woman’s neck, indicating she was strangled.

Ruiru Sub-County Police Commander, Phineas Ringera, said a multi-agency team comprising police officers and DCI detectives tracked down Munyao, a waiter by profession, to his workplace at a restaurant on Thika Road, where he was arrested.

“We have since collected the woman’s body and taken it to General Kago Funeral Home for postmortem,” said Ringera.

Munyao is being detained at the Ruiru Police Station.

KDF Soldier Gunned Down After Resisting Armed Robbery in Nairobi < Previous
5 Instagram Poll Ideas to Increase Stories’ Engagement Next >
Recommended stories you may like: