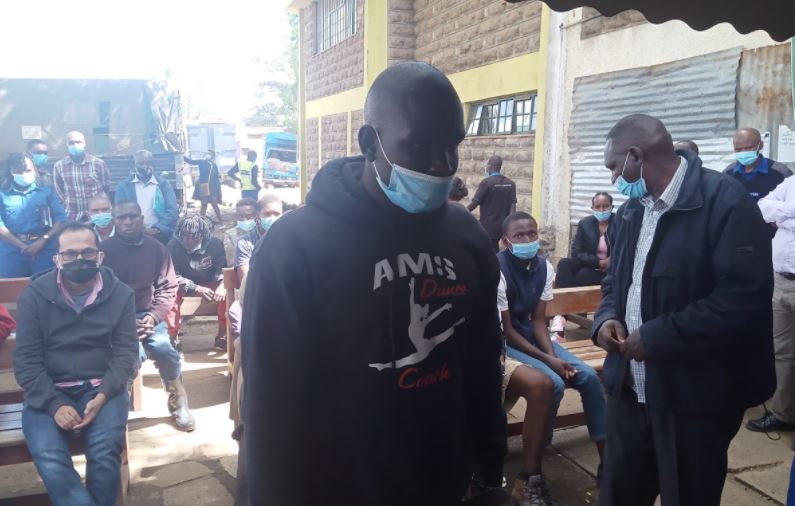 Another serial burglar nicknamed ‘Spiderman’ who has been terrorizing Nairobi residents has been arrested.

Kennedy Otieno Oyier, 27, has been scaling apartment walls in Kilimani and Kileleshwa estates, earning himself the tag ‘Spiderman 3’.

Police said he had been on the run for weeks and had even changed his residence after realising detectives were on his trail.

Oyier, who has been stealing electronics, money, jewelry, and other household valuables, led officers to his residence in Kawangware where they recovered 10 laptop bags, 20 flash disks, one television set, several motor vehicles parts, metal bars used to break into houses, and assorted electronic cables. 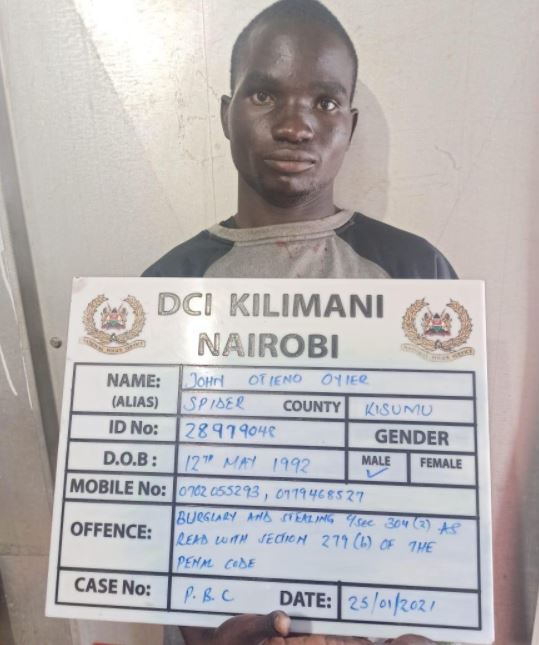 Detectives also noted that Oyier is a brother to another suspect John Otieno Oyier, who is infamously known as ‘Spiderman 2’.

Spiderman 2 was arrested in January of this year and is being held at Industrial Area prisons.

Spiderman 3 told police he and his brother got skills of scaling the walls from a movie they watched online.

He said they have broken into many residences in the posh Nairobi estates using metal rods and master keys.

Police believe he has been working with security guards of the affected apartments to carry out the heists.

Oyier was Monday arraigned at the Kibera law courts where police constable Stephen Kibei from Kilimani DCI offices made a successful miscellaneous application to detain the accused.

“Preliminary investigations indicate the suspect was a notorious house breaker and who has the habit of terrorizing residents of Kilimani and in some incidences, he was captured in CCTV footage,” constable Kibei told the court.

Adding: “During the time of the arrest one mobile phone which we believe contained important information which will assist in arresting his accomplices was recovered from the suspect.”

Senior principal magistrate Charles Mwaniki granted detectives seven days to hold the suspect and directed that the matter be mentioned next week.

The first spiderman, identified as Michael Joseph Otieno Odhiambo, was arrested in 2019 after he was caught on CCTV  scaling walls in Kilimani apartments.

A fourth spiderman was convicted in February of this year for stealing from personnel at the National Youth Service (NYS) headquarters in Ruaraka.

He had broken into Njeru’s house at dawn and stolen underwear, a subwoofer, and a claw hammer, all valued at Sh4,900.

While sentencing Ochieng’ to three years in jail, Makadara chief magistrate Heston Nyaga remembered convicting him for a similar offence in 2016 and nicknamed him the ‘Spiderman of NYS’.

“He must be another Spiderman after the one who has tormented the residents of Kilimani in Nairobi only that this one can be termed as the Spiderman of NYS,” Nyaga noted.

“Having proven that the previous term has not taught him a lesson, I think a larger sentence may do so,” the magistrate ruled.

Interestingly, three of his accomplices are serving death sentences for robbing him. They had reportedly disagreed on a sharing formula after a successful heist at NYS in 2016 before his accomplices armed themselves and violently robbed him.

In the 2016 case, Ochieng’ had admitted to charges of stealing a TV and a mobile phone valued at Sh55,000 from Fridah Opiyo Odongo’s house and was jailed for two years after being arrested while selling the items to a police officer.

The convict is said to have been brought up inside the NYS headquarters where his father worked before he retired.

20 More COVID-19 Deaths as Kenya’s Positivity Rate Rises < Previous
Why Should You Use a Mobile-Based Bitcoin Wallet? Next >
Recommended stories you may like: