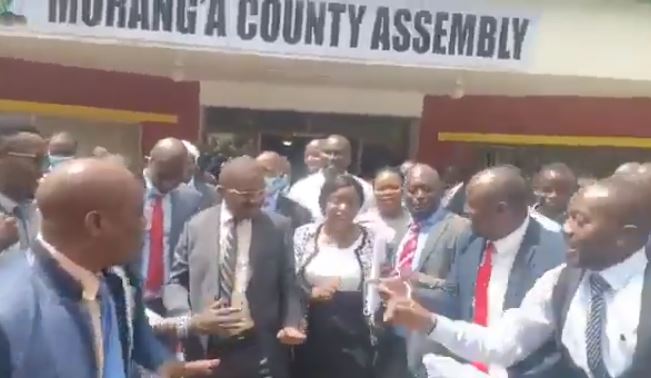 It had come to be referred to as Super Tuesday, and by the end of the day, there was one clear winner.

The pro-BBI group led by President Uhuru and ODM leader Raila Odinga had prevailed. The bill was passed overwhelmingly in Central region, with many counties giving a unanimous approval to the bill that will greatly alter the 2010 referendum.

Many people are of the opinion that the car grant promised to the MCAs had a lot of sway, and that public support is still low. But that remains to be seen.

Upon approving the bill, what better way for the MCAs to celebrate the passing other than dancing to a 4 decade old song that has just recently gone viral.

By now you have heard of the catchy ‘Firirinda’ song, released more than 35 years ago by Dick Njoroge alias Munyonyi.

Despite it being a Kikuyu oldie, many millennials and gen z genuinely think it was a new release.

It is a celebratory song that urges hosts to welcome visitors with beer, and those who don’t partake, with tea.

MCAs and residents in Murang’a, Nyeri and Kiambu erupted into the now viral dance.

In Nyeri town it was all about free dance or as is known kwa ground, Firirinda, after the assembly there joined the long list of counties that have passed the BBI Bill. Referendum tunasija sasa! #BBISuperTuesday pic.twitter.com/sDZg8jpZgs

Spotify is Now Live in Kenya.. These are the Prices < Previous
PHOTOS – Meet The Real Mama Otis and Baba Otis Who Inspire Flaqo’s Comedy Next >
Recommended stories you may like: