My Agribusiness Hustle – I Failed Several Times But Never Gave Up 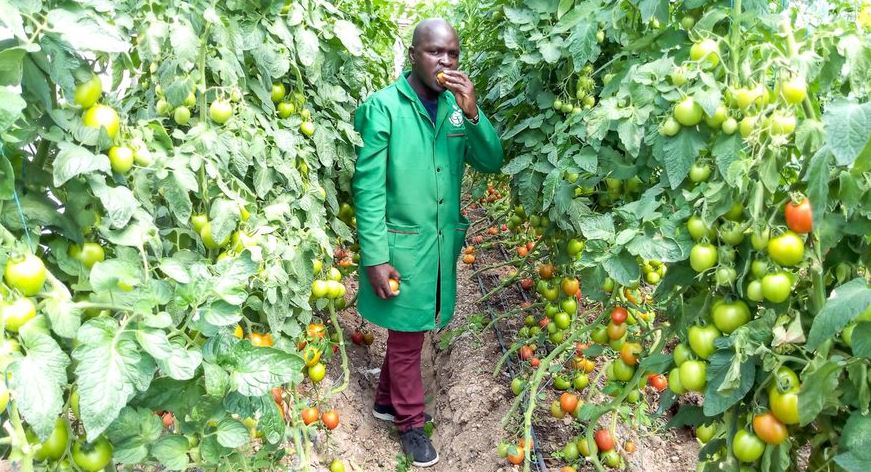 Gad Kamarei from Kitale, Trans Nzoia County, took early retirement to focus on on-site farming after failing several times to do ‘telephone farming’. He spoke to ‘Seeds of Gold’ on why he never quit and how he got it right.

Not many people retire young to farm, why the decision?

I believed it was time for me to focus on my farming venture because I had failed many times. I quit after 12 years of service.

What is your farming journey?

I started farming soon after sitting my KCSE exam in 2006. I joined hands with a family member and we set up a poultry unit.

My father, who is a teacher, took a Sh10,000 loan for me to invest in the business. My partner raised a similar amount. Of the 100 chicks we started out with, 80 survived and we sold each at Sh400, which was quite encouraging.

In 2008, I joined college and graduated after two years but I was still passionate about farming.

Thus, in 2010, I leased two acres and planted maize, investing Sh350,000. I ended up making losses due to heavy rains that destroyed some of the crops.

After the loss, I took a break as I realised telephone farming is not easy. In 2014, however, I tried dairy farming, investing Sh800,000 in the project.

But as fate would have it, I was deployed out of the country for official duties. The project did not end up well and once again, I burnt my fingers.

You did not think of giving up?

I had faith because as soon I returned into the country in 2016, I started farming courgettes on a quarter acre I had bought in Runda Estate, Nanyuki.

I sold the produce to my neighbours and colleagues, and the demand was good. I saw a gap and I decided to fill it.

But before going big, I visited several successful farmers and attended agricultural shows to get skills, what I had not done before starting my previous ventures.

I then installed a drip irrigation system and started farming red bulb onions. Heavy rains spoilt the yield but I recouped my capital – luckily. Another onion crop earned me some good money,  just the push that I needed.

I have has since expanded my business, growing tomatoes in greenhouses as well as onions, broccoli, cucumber, and traditional vegetables such as black nightshade (managu) and spider plant (saga), among others.

I get irrigation water from seasonal rivers and a borehole, whose water I store in a 10,000-litre tank. Things are turning out positively.

I will be among some 500 farmers that will benefit from a two-million-shilling water pan project initiated by the Laikipia County government. This will be a huge boost.

Where is your market?

Nanyuki is a tourist destination town, where we have several hotels, restaurants, lodges and ranches. These are my clients and demand is overwhelming. I also sell my produce via social media.

In June, I set up a vegetable store that I have named Good Fortune Greens, through which I sell my produce. This has also enabled me to contract to some farmers to supply me.