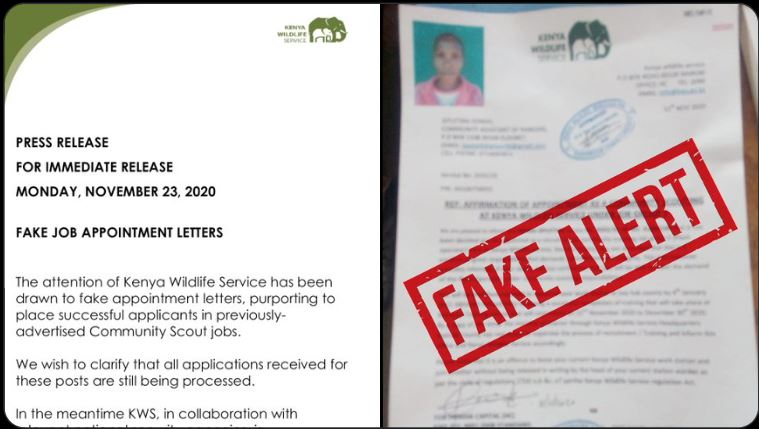 The Kenya Wildlife Service (KWS) has cautioned members of the public against fake appointment letters for Community Scout jobs.

In a statement on Monday, November 23, KWS said fraudsters had infiltrated the process and were issuing fake appointment letters to applicants who had applied for the 5, 500 positions announced by President Uhuru Kenyatta during his seventh Presidential Address in May.

The service noted that the shortlisting process and the issuance of appointment letters has not started.

“The attention of Kenya Wildlife Service has been drawn to fake appointment letters, purporting to place successful applicants in previously-advertised community scout jobs. We wish to clarify that all applications received for these posts are still being processed,” read part of the statement.

In the meantime, KWS, in collaboration with relevant national security agencies, is investigating the matter to bring to book culprits behind this fraud.

“Members of the public who come across, or are approached by such fraudsters, are advised to report the matter to any KWS office across the country,” said KWS.

The successful 5, 500 scouts will help in the wildlife conservation efforts under a short term contract of six months, renewable once subject to performance.

All That’s Trending This Tuesday < Previous
Man, 70, Lynched After Attacking Relatives With Machete Next >
Recommended stories you may like: