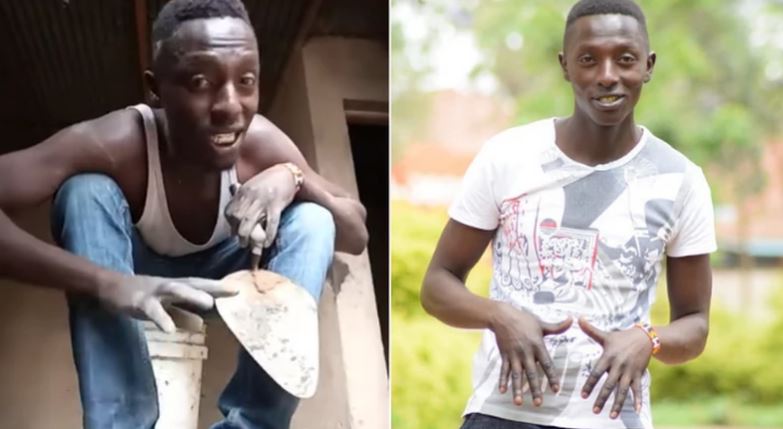 The overnight internet sensation, Alex Mbugua aka Jamsta, looks set to hit the studio after getting recording offers from two of Kenya’s top music producers.

Jamsta wowed Kenyans on Twitter Monday after posting a video singing D-Major’s hit song, “Girl of my dreams”, with the video quickly spreading to other social media platforms.

The talented lad, who recorded the clip while working at a construction site, says he did not expect the kind of reception the video has been getting as he has was just doing what he normally does.

“I was just recording for the sheer joy of it because I have been doing so more often. I recorded some and posted them on twitter and they ended up getting like 10 retweets. I don’t do music for fame, because to me its a passion. I didn’t know it would go viral, I just posted it and requested a few people to retweet it, like Churchill and they did and I guess that is where it blew up,” said Jamsta.

Gotta hustle. And still wanna search for the ‘GIRL OF MY DREAMS’
0£ for you to retweet?? pic.twitter.com/Y80YjEpigW

Adding: “I’ve always loved music, even when I was young, I remember going through the song lyrics they used to publish in the newspaper. So I can say I was passionate. But it wasn’t until 2010 when I was in high school that one day I woke up at 3 am and started singing. I realized that day that my voice sounded different.”

Jamsta revealed that he has only ever recorded one song but he lost it.

“I had recorded one song but unfortunately everything from the studio I was working from got stolen and I lost the song and I did not have the money to re-do the song, so I just kept it in my mind. It was a relationship riddim version,” he said.

The budding singer is now set to work with legendary record producers Tedd Josiah and Tim Rimbui who offered their services.

“Look for me we record something, your great voice can open some doors and secure you a bag. Look for me,” Rimbui posted on social media.

Jamsta confirmed that he has gotten in touch with Rimbui, as well as Tedd Josiah.

“He(Tedd Josiah) called me yesterday and we had an awesome conversation and we are to meet and see how we gonna do it” Jamsta said.

He added that he is hopeful that more opportunities will arise to help him achieve his dream.

The only thing I would like to ask from Kenyans is support because when you support one of your own, he can go far. If I get the finances to record the songs, then I will ask Kenyans to support me by sharing my work. If I had the finances I would have recorded my own songs, but right now am focused on being a ‘Fundi’ but music still remains in me,” said Jamsta.

He also mentioned: “My role model is Craig David, I have listened to him since I was a kid, I have been a great fan of him. Locally Sauti Sol and Otile Brown.”