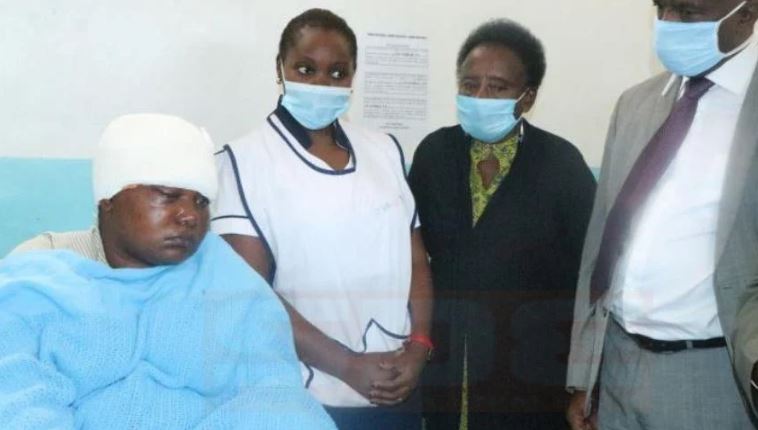 A woman whose hands had to be amputated after she was attacked by her estranged husband in Mbooni East on Saturday has recounted the ordeal.

Purity Muthoki Makau, 24, who is recuperating at Makueni County Referral Hospital, said her husband Boniface Kivuku Mutua wanted to kill her. She also faulted her father, Nicholas Makau Munywoki, for facilitating Mr Kivuku’s visit to their home in a bid to reconcile them.

Ms Muthoki said she had tried to endure in the abusive marriage for a period of three years but she had finally had enough.

“He used to beat me while we were staying in Mlolongo in a rented house and I decided to walk out of the marriage in March, but he followed me to our home,” she said.

“I tried to stay in the marriage but he would beat me and I would escape to our home. He would follow me, negotiate with my father, and we would reconcile,” she added.

Ms Muthoki recounted that on the day of the attack, her husband met her father, held talks with him before Makau reached out to her saying they needed to talk.

“Mutua was in constant communication with my father. On Saturday when he came home it was my father who asked me to go out and talk to him. I told him I will not hold talks with my ex-husband because I had made up my mind to leave. Then at that point, my dad left,” she said.

After refusing to talk to her ex-husband, Muthoki retreated to her room while Mutua was directed to spend the night in a different room. A few hours later, the man climbed through the roof to her room armed with a machete.

“He accessed my room through the ceiling and drew a machete. He told me he had come to kill me,” she said.

The man hacked his wife on the hands and on the head and attempted to flee but angry locals caught up with him and stoned him to death.

Nakuru Man Dies After Choking on a Piece of Meat < Previous
All The Trending Images This Wednesday Next >
Recommended stories you may like: