UCL Knockouts: Nightmare for the English as Germans Reign 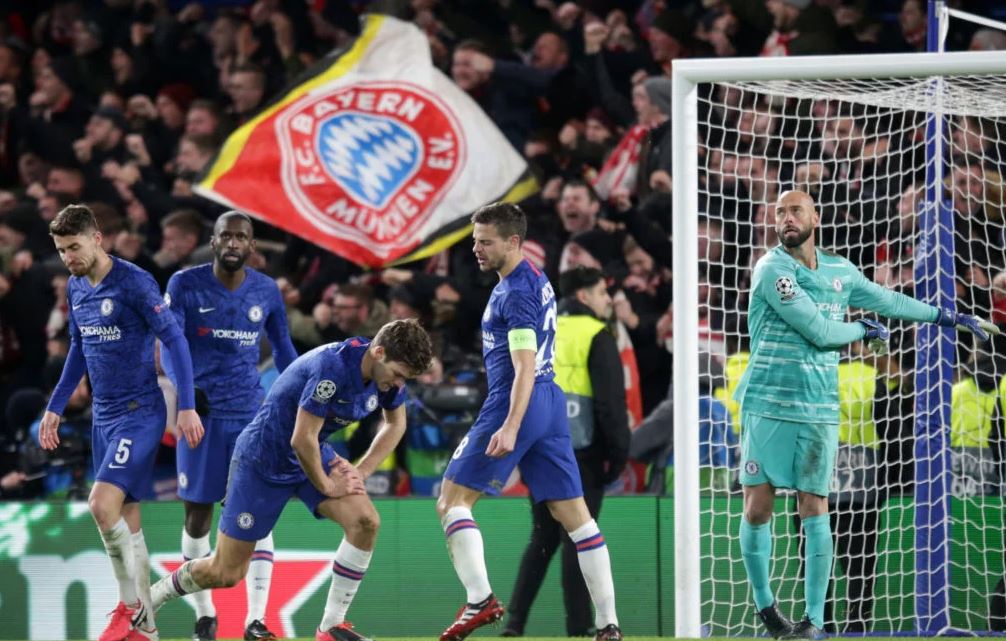 The first leg of the knockout stage of the UEFA Champions League is done, with a number of bigwigs now just hanging on a thread, as far as their chances of advancing are concerned. For the English sides, the first legs were largely a nightmare, as German sides prevailed while it was not very rosy for Spanish sides as Italian giants Juventus were, ironically, the only ones without a positive outing.

Manchester City maintained some pride on English football with a spirited fight, inspired by Kevin de Bruyne, to see the Premier League champions come from down to beat Real Madrid 2-1 away in Spain.

City’s win was a relief not just for the Premier League but for themselves too, coming right after being slapped a two – year ban from the Champions League. Still the nightmare is real for English football with Tottenham Hotspur, Liverpool and Chelsea, all having lost in the first leg.

The happiest lot from the opening leg of the knockout stage, will undoubtedly be the Germans. Each of their three teams registered first leg wins, with Leipzig hitting Tottenham Hotspur 1-0 away as Borussia Dortmund saw off PSG 2-1at home as Bayern Munich whacked Chelsea 3-0 away in London.

Among the Italian sides, first timers Atalanta will have the broadest smile ahead of the return leg matches, after a resounding 4-1 win over Valencia. Juventus, who were expected to win at Lyon, bring back home a 1-0 defeat while Napoli let go of their slim lead to draw 1-1 with Barcelona.

Last season, Premier League sides dominated European club competitions with four meeting in the Champions League and Europa League finals but odds are heavily stacked against them this time. Here’s a sample of what to expect in the return legs of the Champions League knockout stage them.

Dortmund have the advantage going to the return leg of this clash but PSG have all to play for, having lost 2-1 in Germany. The Parisians will have three matches in between this clash while Dortmund have two lined up before they make the trip to France.

PSG have not been doing so well lately, especially in defence but they have the advantage of a huge gap between them and the chasing pack back in Ligue 1, which means they can rest key players ahead of this clash. For the Germans, third in Bundesliga, the chase for the league title, and being just four points off top placed Bayern Munich means each match is of crucial importance.

With five losses in eight away matches in the Champions League, and having failed to score in three of those, Dortmund may just get to blame themselves for not making the score line bigger in the first leg. This will be much more serious considering PSG have three straight clean sheets at home in the competition. PSG seems primed for a win here.

Atletico staged a defensive masterclass that denied Liverpool a shot on target in the first leg, but can they repeat the same at Anfield? Liverpool have not lost at home in 20 straight matches across all competitions and it is 17 unbeaten for them at home in the Champions League. Their main worry though, will be that they have not registered a clean sheet in the last three and facing this Atletico side, it can be tricky should they score.

Leipzig are serious contenders for the Bundesliga title and are strong favorites here too, a marker of the good season they are having. They have tremendously improved in defence and are banging in goals too. They will have one lesser game than Spurs by the time they face off and playing at home adds to their advantage. They are unbeaten in five Champions League matches and will bear the needed confidence going to this clash.

Tottenham on the other hand, have struggled a bit and will have it tough as they look to overturn the 1-0 home loss. They will be hoping to pull the comeback as they did in Amsterdam last season. They have lost the last two Champions League matches and have just three away wins in 10.

Despite their inexperience in the Champions League, Atalanta are in pole position to advance to the quarter finals. They trounced Valencia 4-1 in Italy and with their run of form going to this clash, they will be favorites to secure the slot. They have three straight wins in the Champions League and are unbeaten in four. In their last away match in this competition, they trounced Shakhtar 3-0 and will hope to carry the same form to Spain, even though they need just a draw.

Valencia on the other hand will troop to this game on a poor run. So far, they have no win in their last five matches, though they have two games to play before the Atalanta game. Valencia have five wins and three losses in their last 10 Champions League matches and they will feel they have a shot at this. They will further be buoyed by their three wins in five Champions League matches at home but they have no clean sheet in 13 home matches in the competition. Valencia will push for a win here but face an Atalanta side with a good attacking record though struggled a bit in the group stages away from home. We feel Valencia will win this game but not with the margin to see them advance. A Valencia win on 22bet offers odd of 2.416.

Chelsea’s goose seems cooked; they fell heavily at home to put further pressure on their already tough season. They beat Bayern to the title eight years ago after a good comeback but here there is little hope of recovery after being whitewashed at home.

Bayern Munich are well set to seal a double over Chelsea here. Bet on that at 1.38 on 22Bet.

Napoli were on the brink of taking a first leg win over Barcelona but the Catalans’ equalizer means the two sides have all to play for at Camp Nou. Both sides have an unbeaten run of seven matches in the Champions League but while Barcelona have four wins in the run, Napoli have three.

There is an air of the two sides having equal strength and their first leg showing proved as much. Napoli have no clean sheet in five Champions League matches and Barcelona have one in the same run and we expect that to play out too in the game.

It is the away form however, that may knock out Napoli. While they have one win in nine Champions League matches away, Barcelona are unbeaten in nine, with seven wins.

Manchester City have the advantage going to this clash, after their away win. With three straight wins, they have their mojo back and will be happy to host this match leading 2-1. City are unbeaten in eight Champions League matches and have seven wins in eight Champions League matches at home. Their manager Pep Guardiola knows Madrid too well and should be able to craft a formula towards tackling the Spaniards.

A good bet here would be a double chance of either side to win. This pick is available at 1.25 on 22bet.

Juventus have not had a very comfortable season, both in Serie A and in Europe and here they have another big test. They lost 1-0 away in Lyon and will be looking to overturn this tie. They have delivered when needed to and this should be a small task for a team that has some of the best players in the world.

The loss in France halted a five-game winning run, which saw Juventus keep three clean sheets and they will feel capable of overturning it. They won each of the three group stage matches and will be looking to continue in the same way here.

Lyon have three wins in 10 Champions league matches and away from home they have three losses in their last four matches. They have won just one of the last six away matches and will blame themselves for not scoring more in the first leg. Lyon have not scored more than one goal in four of the last five away matches in the competition and facing a Juventus side with a fine scoring run at home, should leave jitters at Olympique Lyon.

It is possible to create an account on this bookmaker to use all these odds. To do it, check out the registration details on 22bet review by Sportytrader.

Activist Njonjo Mue to Lead Anti-Uhuru Prayer Rally “to Ask God to Remove President From Power” < Previous
The Top Stories on the Internet Today (Friday February 28) Next >
Recommended stories you may like: