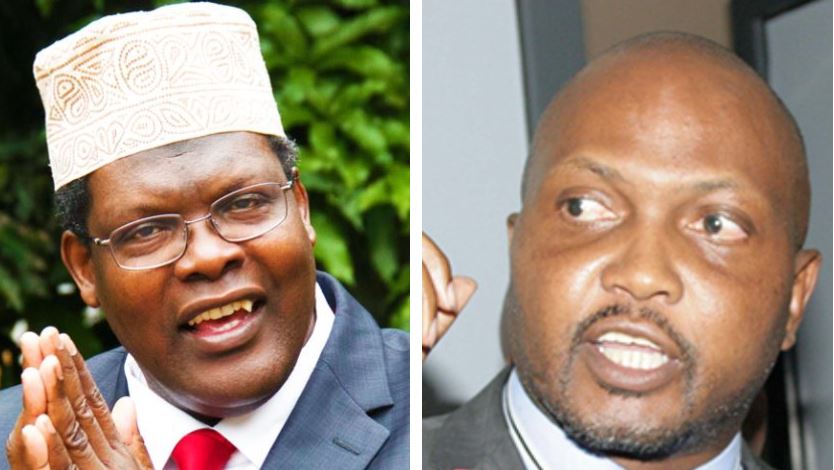 The Gatundu South MP and the exiled lawyer over the weekend rekindled their contempt for each other in yet another ugly public spat on Twitter. The lawyer with the same name twice instigated the war of words after referring to Moses Kuria, President Uhuru Kenyatta and Raila Odinga as “mediocres”.

Apparently, the trio would not be allowed to address goat markets during the days of Tom Mboya.

“In 1963 when Tom Mboya, Argwings Kodhek and Pio Pinto Gama kept Kenyans spellbound with searing eloquence and incisive policies on liberation and Pan-Africanism, mediocres like @HonMoses_Kuria, Uhuru Kenyatta and @RailaOdinga would never have been allowed to address goat markets,” tweeted Miguna.

Moses Kuria hit back within minutes calling Miguna Miguna a coward for unblocking him on the platform just to insult him.

“You block then unblock me only to insult me you wanking coward,” Kuria said.

But Miguna had more in store as he escalated the spat with more attacks against President Uhuru.

“If I was a coward, your beardless husband Uhuru Kenyatta would not have marshaled hundreds of heavily-armed goons to destroy my house using explosives. He would never have detained, tortured, sedated and forced me into exile. Ask him to allow me in and let’s see,” said Miguna.

In response, a seemingly angry Moses Kuria said, “This land does not deserve your carcass. Exile is your destiny.” 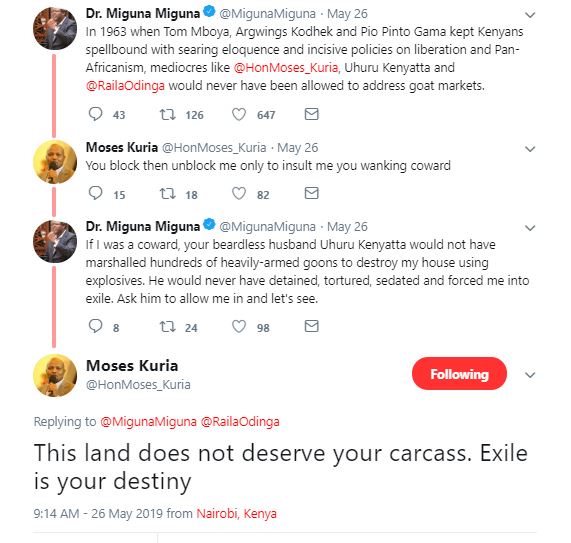 Never one to go down without having the last word, Miguna fired back describing Moses Kuria as an animal specimen.

“Kenya doesn’t belong to you, Mr. Chauvinist. Once upon a time, animal specimens like you believed, wrongly, that Nelson Mandela and his comrades were terrorists that belonged to the Roben Island Maximum Security Jail or exile. But even apartheid was defeated like you will be.”

“The same way I regret dining with you when I knew very well you had, not one, not two but three rape cases in Ontario,” said Kuria.