Police have issued a warning to motorists against the use of high-powered LED lights in their cars as this is unlawful and insensitive to other motorists.

Through its Twitter account, the National Police Service noted that brake lights modification by private motorists and PSV owners is on the rise.

“We have noted that brake lights modification by private motorists and PSV owners is also on the rise and has been reported to cause untold suffering to other motorists, this is unlawful and insensitive too.”

It further warned against other types of modifications on vehicles such as mounting of bull bars on unauthorized vehicles, loud music, and enhanced exhaust systems.

“In the past, ntsa_kenya has sensitized motorists against illegal modifications that include mounting of bull bars on unauthorized vehicles, use of high powered led lights, loud music & modified exhaust systems. All these modifications and others not listed here are unlawful.”

“This is to inform motorists and the general public that all these unlawful modifications will be dealt with as provided for in the Traffic Act.”

The warning comes after a Kenyan on Twitter, @ArcherMishale, shared a video of a vehicle that had modified brake lights.

I had a migraine by the time I got home last night coz of this nonsense.@ntsa_kenya @NPSOfficial_KE @Ma3Route pic.twitter.com/lQ4ks7jsnk 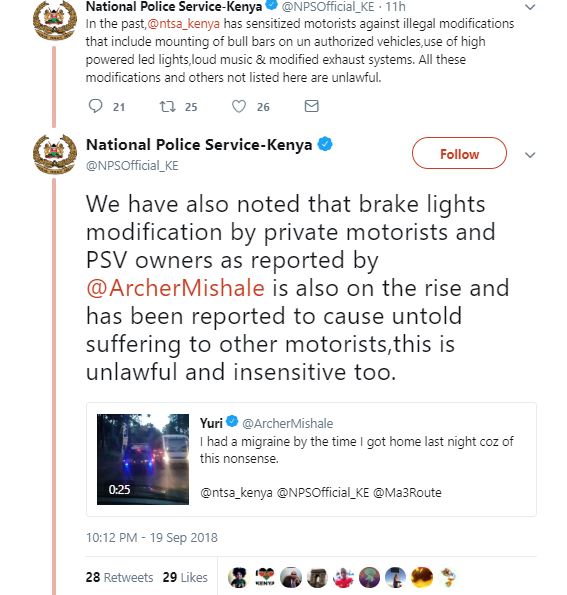 Senator Kang’ata: Uhuru’s Wedding Gift was Sh5 Million Goodies to Murang’a People < Previous
The Hottest Stories on the Internet Today (Monday September 24) Next >
Recommended stories you may like: