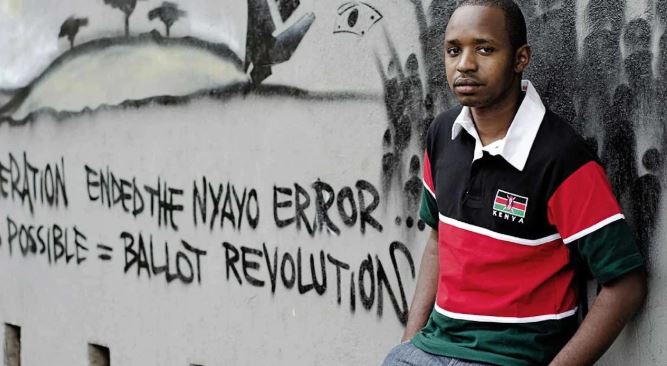 Kenya’s renowned activist Boniface Mwangi believes Raila Odinga has been compromised by President Uhuru to dance to the Jubilee tune.

In yet another scathing attack on the Opposition leader, Boniface Mwangi claims that Raila’s time in politics is up and it is time for him to retire. He alleges that Raila is officially in Jubilee after “he received a hand cheque from President Uhuru in order to stop resisting”.

In the post on Monday, Boniface Mwangi claimed that Raila has ruined the country with his selfish transactional politics which include selling nominations.

“Raila’s selfish, transactional politics has ruined our nation; from selling nominations to destroying those who refuse to bootlick him,” wrote Mwangi.

The outspoken government critic further pointed out that people, especially from Raila’s Luo community, have died while fighting for justice but their leader is shaking hands with killers as if nothing happened.

“People have died, especially Luos, fighting for justice, but Raila Odinga shakes hands with the killers and moves on as if nothing happened,” said Boni.

Boni now wants the NASA leader to retire honourably and go home to play with his grandkids.

The former Starehe Parliamentary aspirant made his sentiments known on social media, sparking a war of words with Raila Odinga’s supporters on Twitter.

“Mr. Raila Odinga is officially in Jubilee and the tune he plays, moving forward, is the one Uhuru Kenyatta pays for. You can continue following him like fools, or choose another leader. Raila has played his role and he must go home to play with his grandkids. Raila’s selfish, transactional politics has ruined our nation; from selling nominations to destroying those who refuse to bootlick him.

“People have died, especially Luos, fighting for justice, but Raila Odinga shakes hands with the killers and moves on as if nothing happened. Raila should now retire honourably and, failing to do so, might find his base dishonouring him one day.

“The people’s president, Raila Odinga, received a handcheque from Kenya’s President Uhuru in order to stop resisting and joined Jubilee. Will he accept a second cheque from William Ruto to say those two famous words, “Ruto Tosha”? Time will tell. Insulting me doesn’t change the facts. That’s all.

Ps: One quality that Uhuru Kenyatta, Raila Odinga, Kalonzo Musyoka and William S. Ruto supporters all share is sycophancy. Instead of addressing issues raised, they call you names. I hope those four are the last tribal kingpins we’ll have and, moving forward, leaders will be elected based on ideology, not tribal base. Luhyas don’t have THE tribal kingpin, but two pretenders, Musalia Mudavadi and Moses Wetangula. Other tribes wait for directions from the others. I am hoping Governor Kibwana will run for President! His corruption-free leadership in Makueni is enough proof that he can make a good president. If he doesn’t vie, we shall #FagiaWote.” 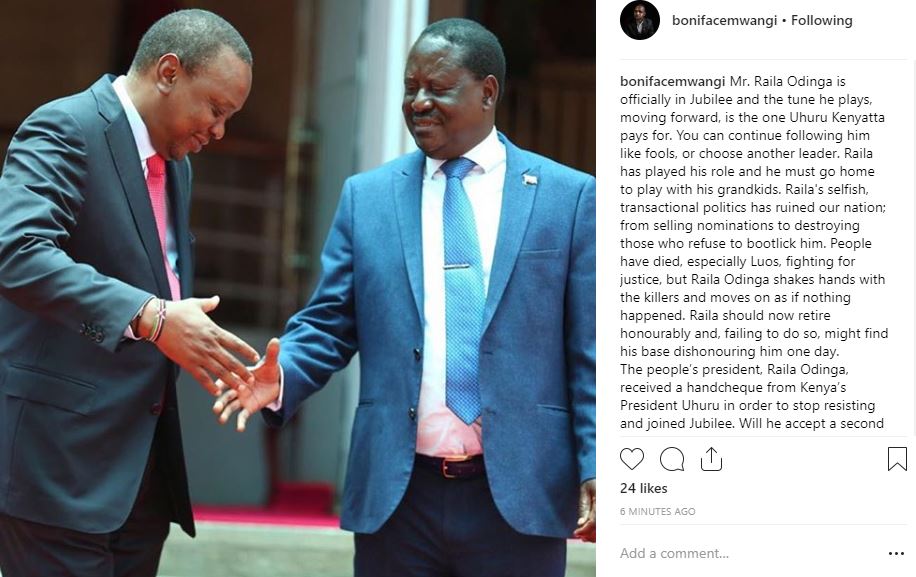