It Was the First Time I Kissed a Girl, ‘Rafiki’ Actress Sheila Munyiva 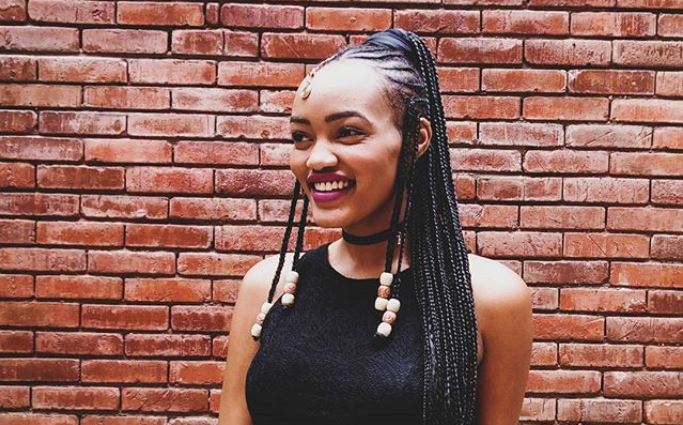 Sheila Munyiva was cast in her first major movie role as Ziki in Wanuri Kahiu’s film Rafiki. The feature film may have been banned in Kenya by KFCB boss Ezekiel Mutua but that did not stop it from featuring at the 73rd Cannes Film Festival in France.

Sheila Munyiva talked to Buzz magazine about the film and how much her life has changed.

I have always been inspired by the women around me. I come from a family of very strong women. When my mother passed away, I was raised by my grandmother who taught me to be very vocal; to speak my mind and go for what I want.

What came to your mind when you read Rafiki’s script?

I was approached to go for an audition for a new Kenyan movie. After our last audition, the casting director told me about the movie and what the storyline will be.

I remember being very, very hesitant and at some point, I contemplated not doing it, but she encouraged me that the script was good.

After finally reading the script, it was just the most beautiful love story ever. It reminded me about my relationship, how I fell in love, and I knew I had to do the movie.

I had set 2017 for myself to be an actor. This was the first film that came and knowing what Wanuri had done I knew it was going to be a big film. So I wondered how it will reflect on me, if I will be typecast as this specific person, and how people will perceive me on the streets as I walk around.

How has it been so far?

To be honest it has been wonderful. After the film was announced, the kind of feedback that we got was incredible. I remember being worried and thinking what was going to happen when I get home. It is interesting to see people recognising me and asking me how they will get to see the film. Others thank me for telling their story.

How did you approach the character you play, Ziki?

The biggest help we got was from our acting coach. Our director Wanuri got us an acting coach from Amsterdam and we worked together for almost a month. We created a feel for Ziki; how she talks, dresses, what drives her, motivates her, what does she feel and why does she feel that way. We did so many exercises which included method acting and improvisations.

What is your take on the subject?

I want to say that I am very liberal. Once I believed in the story, all I thought of was how I would bring the character out. My feelings towards the context of the film is fine.

How do you feel that a Kenyan movie, acted and made by Kenyans, will not be screened for them to watch?

It is incredibly disappointing because if people can remember, Ezekiel Mutua was the first person to talk about Rafiki. He spoke very highly of the movie and said that whatever is portrayed in the film reflects back to Kenyan society, the issues that we face and what kids are going through right now.

A week later he went and banned the movie, saying it promotes lesbianism. To deny the existence of a person because you don’t think they should exist as they are and then to speak so publicly about it, knowing that you have a big following who listen to you, I think was very insensitive of him.

You think it should be released here?

It has to be. The film was shot in Kenya with Kenyan actors and a Kenyan director. Although it is a Ugandan story made Kenyan, it is still Kenyan film that Kenyans will appreciate. The language that we use, mixing sheng and Swahili, shows that we are a force to reckon with.

How did you tell your family about the movie?

I have been incredibly supported. I’m privileged that my family, friends and my partner are people who understand arts and that life is not always straight and narrow. The saddest thing about it is being celebrated so much by the people around you, yet they cannot see what it is they are celebrating you for.

How did your boyfriend react after you were cast in the movie?

If there was anyone who was excited to watch the film it was him for whatever reasons.

He was part of our rehearsals and helped me draw a lot from our feelings; how we interact and how we get along.

When I read the script, I saw a lot of my friends who could not come out and had to hide who they were. I have friends who have tried to commit suicide because society has cast them away.

What was his reaction and was this the first time you kissed a girl?

He was okay with it because he understood what I was doing. And yes, it was the first time I kissed a girl.

Do you support the LGBTQ?

People now recognise you because of Rafiki, but who is Munyiva?

I grew up in London and Nairobi. When I was done with high school, I had this vision of being an incredible news anchor.

A few semesters into my Mass Communication course, I was invited by a friend to go to a film set. I was watching the director and the actors as they did their routine. Something in me ticked and I realised that that was what I was meant to do.

I changed my course. I have produced a lot of shows and television commercials. I produced a children’s show which aired on Zuku, directed very many advertisements even for – Nation Media Group. Mostly, I have been behind the scene.

If you could be any animal what would you be and why?

A dolphin. The freedom and water is everything.

Lateness. I’m always on time and I dislike being kept waiting.

Describe yourself in three words.

Oh my gosh, their smile.

CRAZY: The Funny Pics/Memes Going Viral on Kenyan Social Media < Previous
Hilarious Posts by Kenyans on Social Media to Take Away Those Monday Blues Next >
Recommended stories you may like: