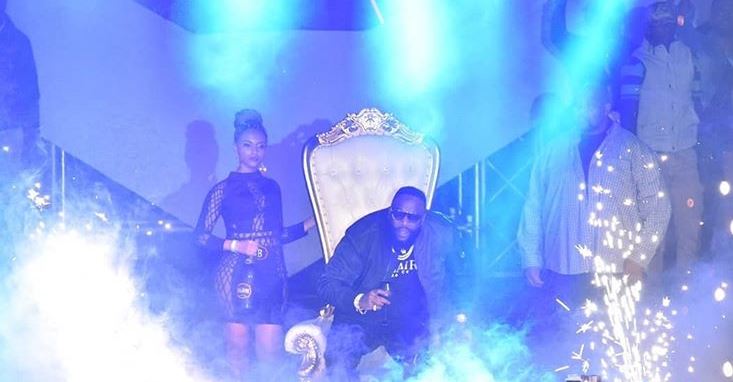 American rap mogul and entrepreneur Rick Ross came, rocked his show, and left his Kenyan fanbase wanting more. However, word on the street has it that not everyone was as pleased.

According to reports, some members of the first family did not get to hang out with Rick Ross, even after buying out the VVIP tent at the Carnivore.

HotSecretz reports that the First family members were set for a photo opportunity with Rick Ross before he walked on stage for his performance at 1 am.

But the plan never materialized because Rick Ross’ security whisked him straight to stage the minute he walked out of his limo.

It is said that the First family then sent word via their security detail to the stage manager during Rick Ross’ performance, asking him to “make it happen”.

That didn’t work either and after the show was over, the “Hustling” hitmaker was once again whisked away to his hotel room.

According to an unnamed source, Rick Ross had earlier that night suffered “seizures” and had “breathing problems”.

“His team had to get a masseuse to massage him for an hour before he went on stage. During his whole visit to Kenya, the star did not touch any alcohol.”

“That is why when he got on stage he took the seat and was on it for a while.”

It is believed Ross’ health scare explains why he was whisked in and out of the concert venue with little ceremony.

Youngest MP Denies Manhandling Resident During Demonstration Over Poor Road < Previous
Babu Owino and Millicent Omanga Kiss and Make Up – PHOTOS Next >
Recommended stories you may like: