Raila Blasts Matiang’i For Failing His Handshake With President Uhuru 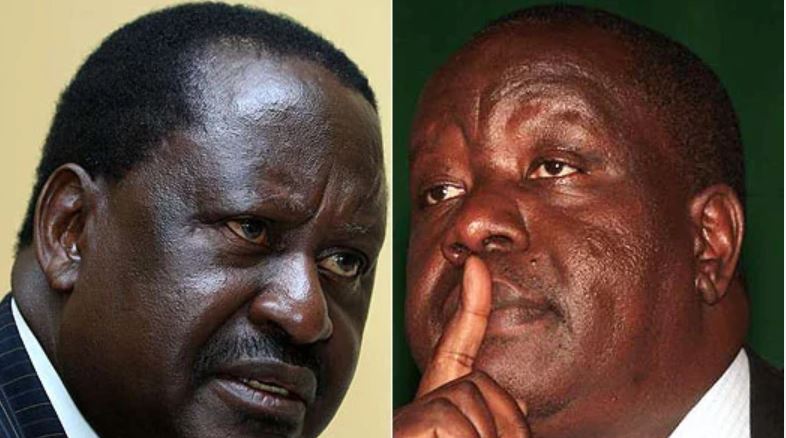 Opposition leader Raila Odinga has laid into Interior CS Dr Fred Matiang’i following his attacks on the judiciary on Tuesday.

According to Raila, Matiang’i was going against the spirit of his handshake with President Uhuru Kenyatta on March 9, 2018.

In a statement, Raila accused the CS of using words that “should not be on the lips of a State officer” to attack judges. He said it was wrong, and Matiang’i should have instead appealed the decisions he was not happy with.

“As a cabinet secretary of this republic, this outburst by Dr Matiang’i was highly irresponsible and reckless,” said Odinga.

He added: “It is unethical and irresponsible for a Cabinet Secretary to publicly denigrate another arm of government and to refer to judges as “evil.”

Odinga noted that Matiang’i’s allegations were frustrating their reconciliation and unity efforts with President Kenyatta.

“In our statement to the nation, President Kenyatta and I urged every leader and every Kenyan to embrace the responsibilities they know to be theirs and help the nation reconcile and make progress. Dr Matiang’i failed terribly in this yesterday,” said Odinga.

“The CS appeared before Parliament to answer questions pertaining to abuse of rights of citizens and undermining the rule of law. Instead, he came out as the personification of impunity. Parliament should not allow itself to be a platform for State officers to make attacks on other arms of government.”

Odinga continued: “We have just come from the longest, most dramatic political period in Kenya’s history. Every leader should know that and should behave and talk in ways that will help Kenyans re-focus on the problems we have in a sober and rational manner rather than worsen them. The politics and leadership of chest-thumping, fear mongering, hate and division must end in Kenya.”

The Opposition leader also faulted the Interior CS move to castigate his predecessors in the ministry for what he said was selling citizenship and massive fraud in the immigration department.

“It is irresponsible to castigate one’s predecessors in office particularly when they are dead and not there to defend themselves.”

“If the CS feels that his predecessors in office did not carry out their work in a way that is satisfactory, he is the Cabinet Secretary now. He should correct what he believes is a mistake and change the processes of the Ministry so that those mistakes do not compromise the State,” the ODM leader said.

“But he should not treat Kenyans to the drama that he played out yesterday before members of the National Assembly.”

“You Will Pay For Brutalising Me,” Miguna Miguna to Matiang’i < Previous
The Hottest Stories on the Internet Today (Friday April 6) Next >
Recommended stories you may like: