“Jelimo Made Investments Behind My Back and Refused to Have Children,” Athlete’s Ex Hubby Tells It All 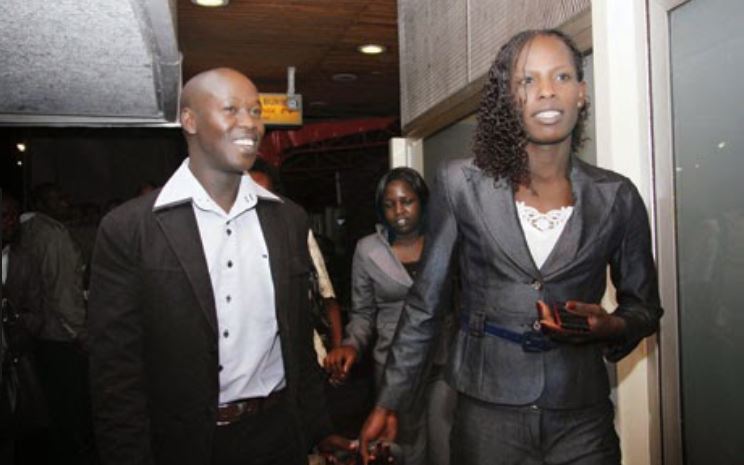 While opening up about their once happy union, Kiprotich said Jelimo’s millions turned their simple but happy union into a complicated relationship full of “unnecessary and malicious” friends and confidants.

“We moved from an almost invisible couple to this famous and wealthy couple by Kenyan standards. Suddenly, we had too many friends and advisers, most of whom we had not associated with at all before the money and fame.”

“My wife, one I had lived with in times of poverty and need, could not trust me with anything. I could not understand the woman I had known since our time in high school,”  lamented Murray.

went to great lengths to secretly acquire property in her own name without his knowledge or blessings as the man of the house.

“We would sit and make plans to invest, only to discover later that my wife had already secretly acquired property with the help of lawyers and put everything in her name. I had nothing, not even the house we lived in together,” he said as quoted by The Nairobian.

Murrey claims he was forced to use Jelimo’s high maintenance cars to run personal errands because he did not own one himself and “felt like a squatter” in his own house.

“I did not even partly own the house we lived in. It was almost like she was preparing for our separation,” he said.

Despite Kiprotich’s determination to save his lifelong commitment to the 800m champion, their marriage hit the rocks in 2012, ending in a bitter separation on Friday, October 26, that year.

“The year 2012 will remain my darkest. I lost my wife and almost lost my life and sanity,” he said.

What followed were disagreements on how to divide property that culminated in a publicised court case that is yet to be concluded.

Kiprotich, who has since married and has one child, denied claims he had cheated on his ex-wife.

“We had an honest relationship, I would tell my ex-wife everything. Lies about my alleged infidelity were propagated by our enemies.”

He also claimed that Jelimo refused to have children.

“I always wanted children. But she would shut me out every time I wanted us to discuss children,” he revealed.

Kiprotich, who claims he has never met Jelimo since their separation, added that he is happy without Jelimo but the journey to finding his happiness has been a difficult one. He came close to losing his “sanity and life” after the separation with Jelimo, whom he accuses of treating him like a ‘personal donkey’ and leaving him with nothing despite his efforts.

“I gave her all of me. Apart from being her husband, I was her training mate, athletics adviser, and coach. When our marriage ended, I left our home with nothing but my clothes,” recalled a bitter Murrey.

“I did not fear being broke, that is what I had been all my life before the million dollars. I was determined to bounce back.”

Having graduated from Moi University with a criminology and public administration degree, Murrey started his own consultancy, advising clients on how to go about court procedure among other issues and “when business was low, I would secure short term contracts to drive clients to various destinations.”

Murrey finally got a job with the Nandi County Government as an enforcement officer.

“I have never had the opportunity to meet my ex-wife face-to-face since that fateful day in 2012. I can confidently say, however, that I have no interest in meeting her ever again,” said Kiprotich.

He added that he is still saddened by Jelimo’s flagging fortunes on the track.

“Despite our separation, I would love to see her succeed as a runner. This has not been the case and it is regrettable. She had such promising talent…” he said.