Uhuru, ”I Swear I Will Not Sign MP Salary Increment Bill” (VIDEO) 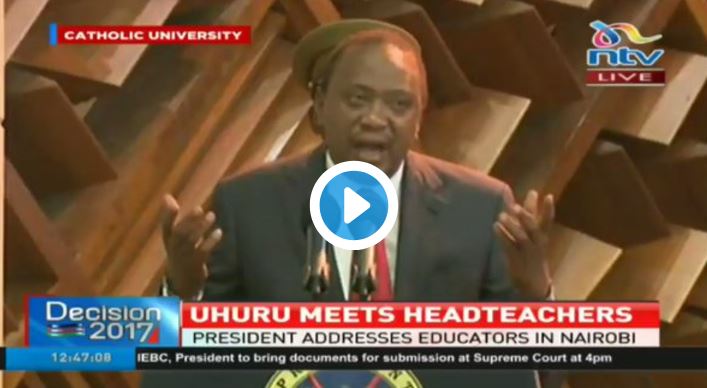 President Uhuru Kenyatta has added his voice on the MP salaries debate. This week Homa Bay Woman Representative and Parliamentary Service Commission member Gladys Wanga called a press conference and stated categorically that they would reject the new proposal by Salaries and Remuneration Commission to slash their salaries.

She said the move was meant to rob parliament off its status and reduce the legislators to beggars.

Shortly after, more MPs elect came out in support of the same. Kiambu woman representative-elect Gathoni Wamuchomba particularly came under fire when she said that she needed to be ‘honored for who she is’. Millie Odhiambo also came out in support of Wanga during an interview on Jeff Koinange Live, saying that even their old salary is not enough.

Speaking at Catholic University of Eastern Africa yesterday, President Uhuru stated that he would not be party to any increment. He told the MPs to abide by the new SRC proposal, swearing that he would not sign any bill on their increment that passes through his desk.

Meanwhile, ODM has also distanced itself from Gladys Wanga’s remarks. In a statement yesterday, ODM stated that it is not the party’s position to go against Sarah Serem’s guidelines.

STATEMENT ON REMUNERATION AND PERKS OF MEMBERS OF PARLIAMENT

Our attention is drawn to a statement by some incoming Members of the National Assembly regarding proposals for the rationalization of remuneration of members of Parliament as recommended by the Salaries and Remuneration Commission.

Among those behind the statement were members of our Party. The Orange Democratic Movement wishes to categorically state that the position taken by those members do not represent our position as a Party nor that of the National Super Alliance of which we are affiliate.

We stand for equity and prudent management of public resources. We cannot therefore promote or be seen to promote wastage, avarice and inequities in the Kenyan society.

Our members in different leadership positions are highly encouraged to always attempt to mediate their personal interests with public good that constitutes the substructure of ODM ideology of Social Democracy.

‘It Was Not an Easy Task’..Detective Reveals How They Gunned Down Nairobi’s Most Wanted Thug < Previous
The Hottest Stories on the Internet Today (Monday August 28) Next >
Recommended stories you may like: