Watch: Anne Kiguta Snaps at David Ndii for ‘Belittling’ Her 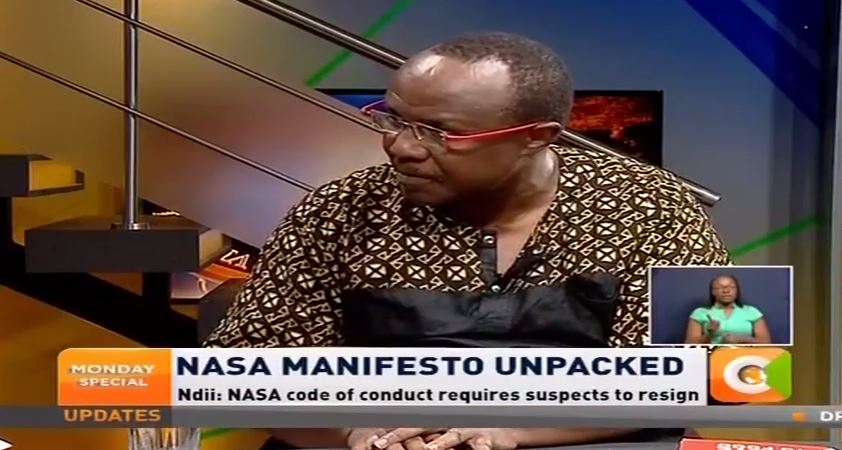 Nasa chief economist and rumoured Treasury Cabinet Secretary under Raila Odinga, David Ndii, was on Citizen TV on Monday night. Anne Kiguta was initially supposed to host Musalia Mudavadi but he was a no-show.

Dr. Ndii is believed to have been the main brain behind the Nasa manifesto, and he is therefore an obvious choice when it comes to explaining and defending it on TV.

However, Anne Kiguta did not find his answers sufficient from the word go. Nasa has been accused of coming up with a very generalized manifesto which avoids details of projects or how they will be implemented. This, according to Anne Kiguta, will make it difficult for the coalition to be judged on performance basis.

The presenter pushed Dr. Ndii for specifics several times, which led to some very uncomfortable scenes in the studio.

When it came to matters land rights. Anne Kiguta wondered why it is not included in the manifesto. Dr. Ndii interjected saying the issue is addressed in the manifesto (albeit indirectly), through the chapter on nation building. He continued to explain that Nasa manifesto is all about implementing the constitution, and that land rights are covered in the supreme document.

Anne Kiguta was seemingly not satisfied with the direction this explanation was taking. She kept interjecting asking for specifics on how Nasa will implement the land rights provisions. David Ndii on his side kept saying they will implement the constitution.

After a period of push and pull, an irritated David Ndii asked Anne Kiguta, ”Have you read the constitution?”

“I have,” she replied. “Read it again,” came the response.

At this point, Anne Kiguta was done smiling.

She told him there was not need to be rude in his responses and a simple yes or no answer would do.

Ex-British Soldier who Saved 200 in Westgate Terror Attack Shot Twice During Ambush in Nairobi < Previous
Larry Madowo and Ekuru Aukot in War of Words Over Ekuru’s ‘Mammoth Crowd’ in Naivasha Next >
Recommended stories you may like: