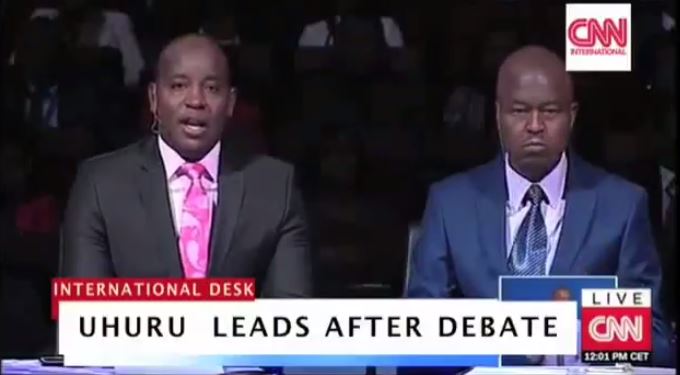 The same script that Donald Trump used to demonize the Clintons in 2016 is being applied in Kenya.

Fake news has become the single biggest source of online propaganda as we approach August 8. We have discussed in great depth how fake opinion polls have been circulating on social media. The NIS has also been looped in countless times, including by Raila Odinga himself.

Now, one of the most creative piece of fake news we’ve witnessed in this election comes in form of a CNN video. It’s obviously done by Jubilee people and is meant to paint Uhuru in good light after he snubbed Monday night debate.

A lot of work went into this one, pointing to some professionals behind it. They even got a voice over for the news report.

But they missed a few details. Like the voice is different from the CNN news presenter supposedly talking. The font on the story is different from what CNN uses. And most importantly, they use videos showing Uhuru’s achievements instead of the more relevant debate footage.

I can only imagine how much this clip has circulated on Whatsapp.

Ndungu Nyoro and Complainant in Sh9.5 Million Case Kiss and Makeup < Previous
The Hottest Stories on the Internet Today (Friday July 28) Next >
Recommended stories you may like: