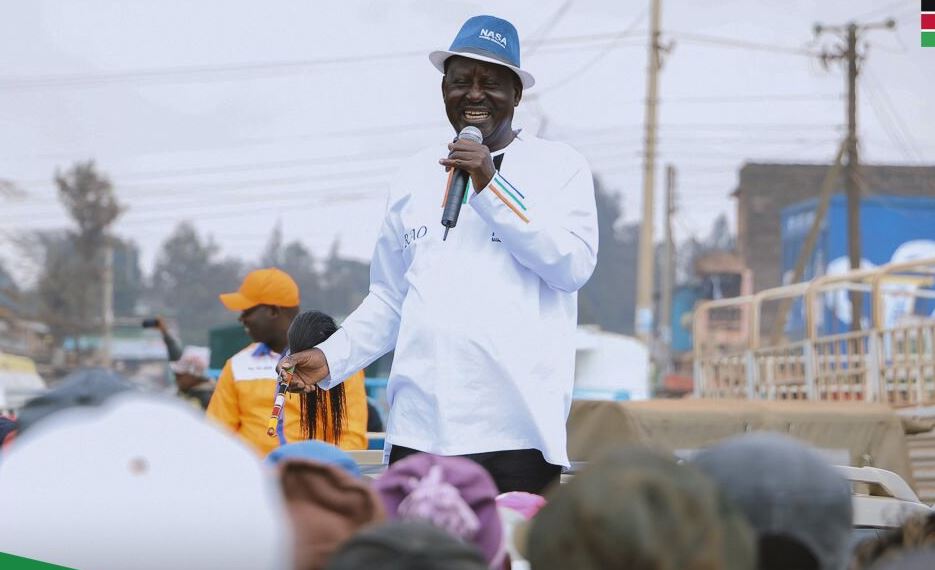 We have been hearing social media murmurs about an alleged NIS poll, and now Nasa presidential candidate Raila Odinga has brought it to the mainstream.

In a press conference yesterday, Raila issued a list of 42 police officers drawn from GSU, Kenya Airport Police Unit, traffic and the dog unit, whom he says have been brought in to perform ‘special duties’. This is all aimed at rigging the election in Jubilee’s favour.

“The officers have been assigned what the Kenya Police Service calls ‘special duties’ via a circular dated June 23,” he said in a statement. “They have been issued with clearance certificates and asked to report to headquarters to be issued with discharge certificates before July 2. Their identification cards have been withdrawn.”

“Information at our disposal indicates these officers will be recruited as polling clerks of the IEBC.”

According to Raila, Jubilee is doing all this after panicking and realizing that they will not win the August election. He spoke of a secret NIS poll that has found him to be way ahead of the incumbent Uhuru Kenyatta.

Here’s the statement in part.

”We have details of a meeting dated Nairobi, Friday 16th June 2017 whose preamble said that an opinion poll commissioned by the NIS the week before had caused massive panic in government as it put the race at 30 per cent to 70 per cent in favour of NASA.
It was after this poll that Jubilee hurriedly formed a team that discussed in their own words, “three possible scenarios of the impending General Elections outcomes, and their likely repercussions.”
The recruitment of police officers into election activities and the mobilisation of other security agencies for so-called peace operation fall within the recommendations of the Jubilee team under scenario number two which was “An Undisputable Raila Win.”
The jubilee minutes dated Friday 16th June 2017 described a Raila win as “tragic” and said president Uhuru Kenyatta would out rightly reject the results and refuse to hand over power.
It is under this scenario of a Raila win, which now looks increasingly likely, that the on-going activities fall.
The Jubilee strategy team had recommended, among other things, use police officers as polling officials (presiding officers, polling clerks, and polling/party agents.)”

This is the first time Raila is speaking of the alleged NIS poll, though it has been mentioned on social media numerous times.

There has never really been consensus among Raila’s supporters on the figures on this alleged NIS poll, but they all agree Raila will win by a landslide.

On May 30, several Raila supporters on Facebook cited an ‘NIS’ poll that apparently had Raila at 51% and Uhuru at 39%. 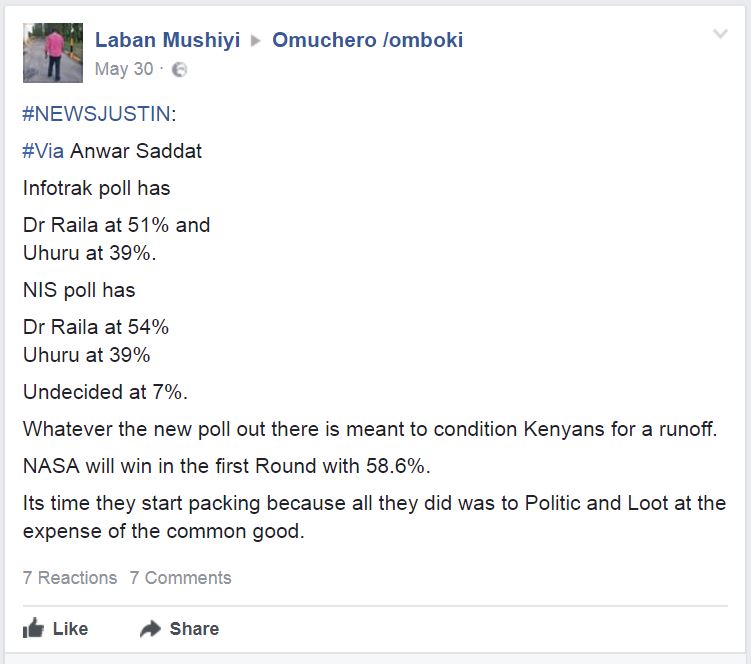 Then earlier this month, Raila’s popularity grew exponentially according to the NIS. 65% of respondents prefer him over Uhuru’s 32%. 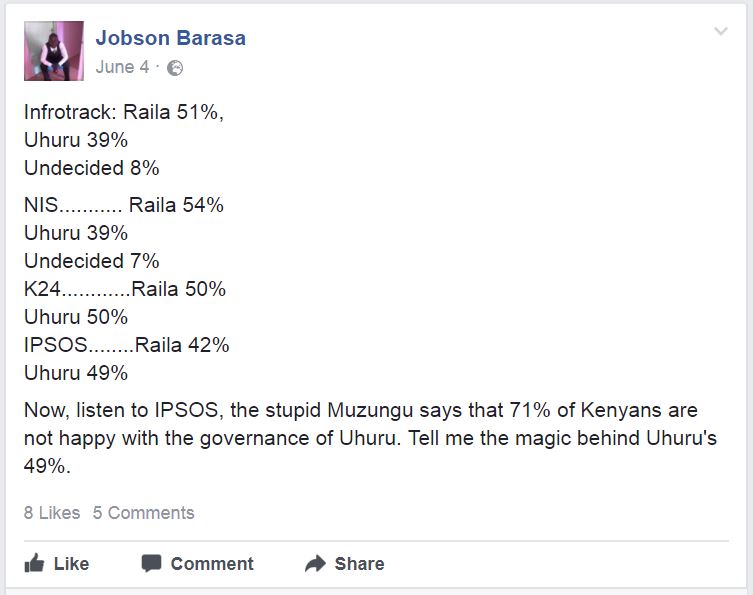 On Wednesday this week, Raila dropped a little according to another NIS poll released by Gordon Joe on Facebook. He got 57% while his closest rival Uhuru Kenyatta increased his support to 41%. Still a comfortable first round victory.

Barely 24 hours later, Raila announced that he is projected to get 70% of the vote by the same NIS.

Well, it’s a bit confusing with all these polls doing rounds, but NIS has never come out to confirm or deny that they conduct any polls. Not that we would expect them to.

But I guess I’m more worried that the NIS intelligence apparatus are so porous that every Kenyan now receives a copy of what should essentially be classified material.

I’m also disappointed with local polling companies like Ipsos and Infotrak for what is clearly inability to apply scientific principles in conducting opinion polls. They have both found Uhuru ahead of Raila. It’s true that they are perhaps vulnerable to manipulation, but how do you explain that a Nasa-commissioned poll conducted by American pollster John Zogby found Raila ahead by just 0.8%, not the 20-40% projected by the NIS?

Does the NIS have hidden knowledge in random sampling which may explain why every other pollster gets their numbers insanely off?

Truth is we will find out in just over 2 weeks whether Raila will win the presidency by the largest margin in Kenyan history (Kibaki had 61% in 2002), or whether all these numbers are just made up.

‘The Day I Was Almost Stripped by the ‘Moral Brigade’ in Thika.’ Ciku Muiruri Narrates < Previous
The Hottest Stories on the Internet Today (Monday July 24) Next >
Recommended stories you may like: